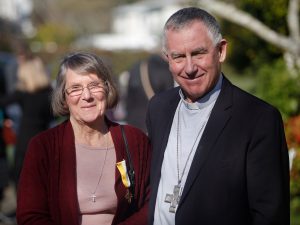 WelCom October 2017: A prestigious papal honour has been bestowed on Mrs Josephine Eynon of Upper Hutt for services to the Catholic Church. At the July 30 Sunday Mass at Our Lady of Grace Church, Heretaunga, Cardinal John Dew presented Mrs Eynon with the Benemerenti Medal and a parchment from Pope Francis.

Josephine has served as a church-music conductor and co-ordinator for the last 21 years and is responsible for most of the liturgical music at Our Lady of Grace Church. Many past parishioners of the church music group came from near and far to play again at the award Mass.

Josephine is noted for her great warmth and generosity of spirit. Her leadership skills give capable guidance that attracts loyalty and love from the musicians.

For 13 years Josephine was involved in Catholic chaplaincy work at Victoria University, Wellington. Students recalled with affection how she brought help, encouragement and prayer to student life and struggles. They described her efforts as ‘yeast in their life, where a little given, went a long way and achieved much’.

Josephine was also among a group of women instrumental in founding the ‘Circle of Friendship’ group. Some 30 to 40 women continue to gather each month for companionship and to raise funds for the Catholic Mission, El Pozen, in South America. The friendship group is open to all women from all denominations and wider.

Josephine continues to be an active participant and leader of various prayer groups in her parish. Parishioners celebrated her achievement after Mass at a lunch in her honour.