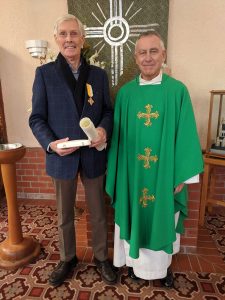 Two founding members of the Catholic Foundation of the Archdiocese of Wellington, Henry Ward and Kevin O’Connor, who retired from the foundation in 2018, have each received a papal award for their services to the Archdiocese.

Cardinal John Dew noted the incredible input of both men and their foresight in setting up the foundation and raising an enormous amount of funds to assist the Archdiocese’s work through the Archbishop of the day, for which he and others were enormously grateful. Cardinal John said both men have been totally committed and supportive of the Archbishop and made many projects and works possible. 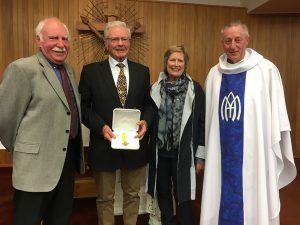 Henry and Kevin each referred to their passion of and commitment to the foundation concept. They set funding raising goals that were well exceeded. They have both lived by the creed that ‘we all have an incumbent onus to leave things in a better condition than what they were’. They have truly done that and have now passed the mantle to others to ensure their work for membership recruitment, funding-raising and funding projects continues.

Cardinal Tom Williams launched The Catholic Foundation in 1981 to build much-needed operating funds for the Archdiocese. New members each donated a cash sum or legacy to become the capital base for a perpetual charity. Within the first month $1m had been pledged and further generosity of new members and sound investment enabled the capital to grow to over $11m. The investment income enables a significant annual grant to the Archdiocese’s operating budget as well as further grants and scholarships each year to other Catholic organisations, chaplaincies and individuals for the benefit of Catholic life in the Archdiocese.