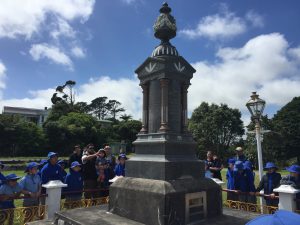 Some in this country question why Guy Fawkes is celebrated here on November 5 each year. Conversely, there is an increasing awareness of the significance of November 5 in connection to our own story. The date commemorates the attack in 1881 when 1600 soldiers invaded Parihaka Pa in Taranaki.

This year’s theme for Social Justice Week, ‘migration – fostering a culture of encounter’, nudges us to find new insights within the Parihaka story.

In the Taranaki area, schools and parishes at Masses on November 6 included a focus on Parihaka through positive celebration and inviting all to take time to pray and ponder.

Many early settler leaders of Anglo-Celtic and European migrations presumed it their destiny to dominate. Gaining power and putting down roots meant acquiring land. The Treaty didn’t apply everywhere – and neither did moral values and justice. Some incomers resorted to confrontation if they could not haggle and acquire.

Pope John Paul II, visiting Aotearoa New Zealand 30 years ago in November 1986 said, ‘People coming here from Europe…did not come to a desert but to a land already marked by a rich and ancient heritage’. Pope Francis says we must venture out of our comfort zones.

Wisdom was available after the Taranaki Land Wars from the 1860s through the witness of two prophetic Māori leaders – Te Whiti o Rongomai and Tohu Kakahu.

They set up an orderly village south of Pungarehu and welcomed Māori from all iwi, many of whom had been dispossessed through land confiscations. They linked Māori values with Biblical sources to preach ‘passive resistance’ in place of armed fighting – a notion new to Māori and European.

Parihaka Māori aimed to stand firm against their land being further invaded and taken but were overcome by settler militarism.

Thoughtful reflection on the uniqueness of the Parihaka story by ‘sitting at the feet’ is our opportunity to learn from our own history.

In an awareness of the unity of all Creation, we can draw on God’s spirit that dwells within all life, all of earth. We might even ‘ask that mountain’ (Ask That Mountain – The Story of Parihaka. Author, Dick Scott, 1975.)