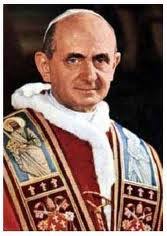 Pope Paul VI, 1897–1978, reigned from 21 June 1963 to his death in 1978. Succeeding John XXIII, he continued the Second Vatican Council, which he closed in 1965, implementing its numerous reforms, and fostered improved ecumenical relations with Eastern Orthodox and Protestants, resulting in many historic meetings and agreements.

WelCom April 2018: Pope Francis has signed the decree paving the way for the canonisation of Pope Paul VI and Oscar Romero. The Vatican published this news on 7 March 2018 after Pope Francis had received Prefect of the Congregation for the Causes of Saints, Cardinal Angelo Amato, in private audience on Tuesday 6 March, during which, he authorised the Congregation to promulgate a number of decrees.

Monsignor Gerard Burns, who lived and served in South America, says of the decree for Oscar Romero: ‘This is wonderful news for all who look to the integration of faith and action for what is right and just. Archbishop Romero was always a dedicated priest who was gradually moved to a more sharp-eyed view of what would bring about a more peaceful and just world by his prayer and his experience in El Salvador in the 1970s.

When he became the Archbishop in San Salvador he was not welcomed by the majority of his clergy but within a month had won them over by his response to the assassination of his friend, Jesuit Fr Rutilio Grande and Grande’s companions, Nelson Lemus and Manuel Solorzano.

The injustice, suffering and death Romero saw around him and his reflection on Vatican II, Paul VI’s document Evangelii Nuntiandi and the teachings of the Latin American bishops at Medellin and Puebla, moved him to a new pastoral approach. Living humbly and simply, he walked among the suffering poor, preached very directly about the causes of what was happening in his country while making constant efforts to assist people at all levels of society.

Óscar Arnulfo Romero y Galdámez was a prelate of the Catholic Church in El Salvador, who served as the fourth Archbishop of San Salvador. He spoke out against poverty, social injustice, assassinations, and torture. He was Oscar assassinated on 24 March 1980, San Salvador, El Salvador.

This brought Romero to his death, but for all these reasons he is sometimes called a martyr for the modern social teaching of the Church. It is for this reason he is – along with Mother Teresa of Calcutta – one of the patron saints of the Caritas International Confederation. Romero’s beatification helps us to recognise the many other martyrs of El Salvador – lay persons, religious and priests – of Latin America and around the world.’