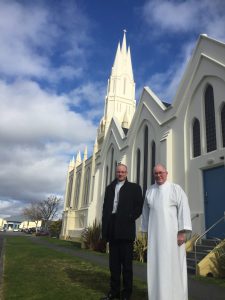 WelCom September 2017: Catholic priest Brian Walsh of the Cathedral of the Holy Spirit in Palmerston North and Chaplain to the local Marist Sports Club has been named a Monsignor by Pope Francis.

The title Monsignor refers to a priest who has been honoured by the Pope for his outstanding services to the Church and society.

With his new title, Monsignor Brian is officially part of the Papal Household or whānau. Bishop Charles Drennan said while this has little impact when living so far away from Rome, it means if Monsignor Brian is ever in Rome he would be expected to support or tautoko the Pope through his participation in Papal ceremonies at St Peter’s.

‘I nominated Monsignor Brian because of his mana within the Church and civic community, his great generosity of spirit, and his wise down-to-earth counsel to so many including myself,’ Bishop Charles said.

Monsignor Brian said, ‘This is an honour for the Catholic community I serve as much as it is for me.’

Tony Murphy, Manager of the Diocese of Palmerston North, said, ‘This is a truly deserved recognition for a good Kiwi bloke, whose outstanding commitment and leadership shows in his care of those within the Church and the wider community.’

Steph Grantham who works with Monsignor Brian at the Cathedral said, ‘Everyone is so pleased and excited that his work have been acknowledged in this way.’

Paul O’Brien, Marist Sports executive director, said ‘We are delighted to hear Brian has been recognised in this way for his extraordinary good work.’