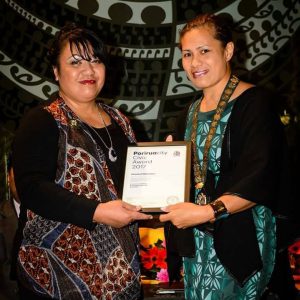 WelCom August 2017: Annabell Malaulau, a teacher at Holy Family School in Porirua, is one of a number of volunteers who have been recognised for their outstanding service to the people of Porirua City.

‘The Civic Awards are the city’s highest form of recognition to highlight and celebrate the efforts of individuals who give up their valuable time to contribute to the community,’ Ford says.

Annabell’s citation says: ‘Annabell has been involved in the school for many years and her impact has been immense.’

She is currently the chairperson of the Volunteer Core Group who are heavily involved in fundraising activities.

Every day Annabell is at the school gate and on road patrol duty ensuring students arrive to school safely. She then volunteers in the classroom with programmes such as ‘Early Words’ where students from various cultural backgrounds learn to read.

With her support in class, her kind and gentle nature has allowed students at Holy Family School to make accelerated progress.

School sports are another passion for Annabell – she coaches and manages every sports team possible, including netball, hockey soccer and mini-ball teams – driving students to and from games during the week and picking up students who need transport for netball games outside school time. Her contributions mean many more students have been able to participate in sport, and parents have been immensely grateful.

The Mayors of Porirua have presented Civic Awards to over 100 residents since 1993.