WelCom December 2017: For the 70,000 New Zealand school children who have been diagnosed with dyslexia, Dyslexia Awareness Week from 2‒8 October this year was an opportunity to reflect not only on the difficulties this disability can produce but also on the positives that can come with it. The theme was, ‘Positive about Dyslexia’.

The Vinnies from St Paul’s School in Richmond, Nelson, and St Peter Chanel School in Motueka swung into action by putting together displays of artwork and information about some famous people with dyslexia. Included were people such as Jamie Oliver, Walt Disney, Albert Einstein, Whoopi Goldberg, Muhammad Ali and Thomas Edison. Designed to raise community awareness, their displays featured in the foyer of St Paul’s School and St Peter Chanel Church during Awareness Week.

Families don’t receive financial assistance with the cost of academic and educational assessments to diagnose specific-learning disabilities. Such assessments can cost around $500. The Vinnies decided this was an important opportunity to help struggling, affected families. St Paul’s Vinnies held a community barbeque at Mitre 10 Mega. They also auctioned off a totem pole, which the boy Vinnies had created at the Waimea Menzshed. St Peter Chanel Vinnies ran a stall after church on 1 and 8 October as part of their Dyslexia Awareness Week display. The stall raffled two mosaic mirrors they had created and sold wheat bags made by a Vinnies group.

For the Vinnies, this was a great way of being able to round off a project that increased their awareness about the difficulties some students can face. 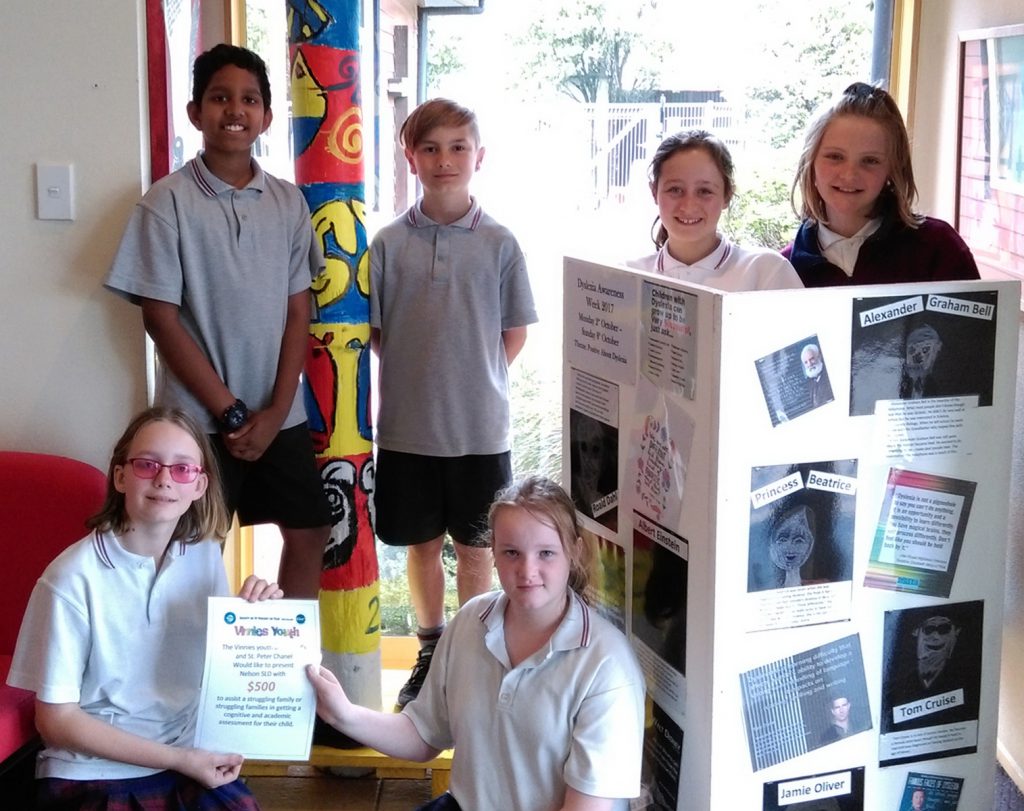 The St Paul’s Vinnies with a certificate of $500 to present to SLD Nelson (Specific Learning Disability Services NZ). Back (l-r) Yonal Jayamanne, Bruno Scragg, Hope Gerrard, Holly Butler; front Poppy Gillooly and Katie Guard. The totem pole was created by the boy Vinnies and the Dyslexia Awareness display was put together by the Vinnie students.