Pastoral Services Manager for the Diocese of Palmerston North, Mark Richards, writes from Rome where he is currently based for three months to complete his doctoral study and research.

As I write this, I have only been on the road for a week, since I left the familiarity (my family) in Palmerston North; and what have I learned?

There is a phrase in that old hymn, ‘leave your boats behind, push out from familiar shores’; and what happens if you do?

I have two ideas. Firstly, I want you to imagine sitting with me in Dubai airport at 5.30am. There were 40 planes, the double-decker ones each had deposited 500 people and were about to take off and fly the passengers to Nice, Johannesburg, Beijing, Paris and Manchester, and me – to Rome. In the early morning light, thousands of people, all on a pilgrimage, all leaving the familiar or going back to the familiar. And as you sat next to them, you smiled; you got on the plane and you flew another six hours over the top of Iraq and Turkey – and pretended there were not people dying below.

At one level, pilgrims are travelling on and seeing new things, being surprised. At the same time, they are having to leave the familiar and are open to meeting the new. But, in a way they are only open to that newness because they are not ‘tied’ down and ‘safe’ in the normal and the familiar. 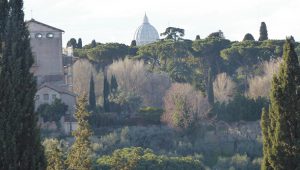 And the view from my balcony’s not bad either! Photo: Mark Richards

This has been brought home to me by the fact that the house I have ‘fallen’ into, by luck, is a ‘guest house’ for lay people finishing post-graduate studies in Pontifical universities, and for visiting professors. We are all here in the guest house – like Chaucer’s pilgrims in the Canterbury Tales – all heading somewhere. The interesting thing is where we are from and who we are. There are 20 here: the Professor of Interreligious Studies at the AOG seminary in California; a Presbyterian studying Lonergan; a leader of the Islamic community in northern Nigeria at a three-month discussion with the Holy See; and there are students who are Ukrainian, Slovenian, Mozambique, Italian, English, Irish, and Orthodox, Jewish, Muslim and even the odd Roman Catholic.

Because it is a house of ‘guests’ it is not a home – the doors are a little closed. But, it is a place where in a week I have already been surprised by the discussions, the openness, the Orthodox liturgy, the fellow who prays facing SSE from here – towards Mecca. In fact, all the maps on Emirates also showed you where to face to pray. I have already met 40 or 50 other people with wonderful ideas and fascinating stories.

And that is what Lent is for. Put the familiar behind, or at least examine the familiar, and open the doors to the stranger, to those hungry for ideas and friendship; break open the heart for prayer and in fasting have concentration on the other, the one who brings life, who is encountered at the morning-tea table, at the checkout in the supermarket, or even in the airport at Dubai – if you just happen to be there at 5.30am on a Tuesday!