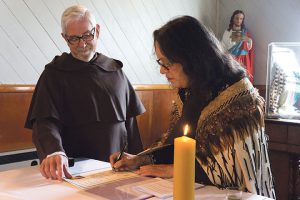 WelCom October 2017: History was made when three Lay Carmelites made their professions in the Third Order of Our Lady of Mt Carmel. The Lay Carmelite community, with seven members now professed and another two in formation, is the first and only presence of this (the original) Carmelite Order in New Zealand.

On Friday 4 August at St Columba’s Church, Ashhurst, and after seven years of study, reflection and prayer, Shayla Rodriguez made her final profession and Teresa Walton made her first profession. Fr Paul Gurr O Carm of Jamberoo, celebrated the Mass. Moderator Chris Wade and the Carmelite Bookshop Coordinator Vera Cleary, both from Australia, accompanied Fr Paul. Shayla’s two children, India Rose Teresa and Noah John Paul, attended the Mass with Teresa’s husband Matthew and other Lay Carmelites. After Mass there was a shared lunch at a nearby venue.

On Saturday, 5 August, Fr Paul celebrated Mass at the Cathedral of the Holy Spirit, Palmerston North, and afterwards met with the Lay Carmelite Community for formation. 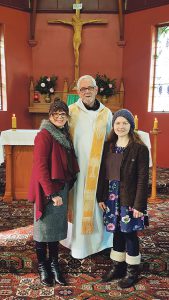 On Sunday, 6 August, Fr Paul conducted the final profession of Frances Wilson of Lower Hutt, at Te Ngākau Tapu, Porirua. Miha (Mass in te reo Māori) was celebrated by Monsignor Gerard Burns, parish priest and Vicar for Māori. Frances wore a magnificent korowai. Attending with support for Francis were her son Douglas Snoodijk of Masterton, her sisters Maggie Gordon from Gisborne and Caii-Michelle Baker from Petone as well as Francis’ extended family and friends. Caii-Michelle sang Flos Carmeli in Latin.

Frances’ final profession was preceded by the baptism of several tamariki and following Mass, the large congregation were shown generous hospitality at a hākari (lunch) in Tū-Hono Hall beside Te Ngākau Tapu Church. There were also speeches of welcome and thanks by the parishioners.

The Australian visitors said they were inspired and uplifted by the experience of celebrating Mass in te reo. Fr Paul said both ceremonies had been ‘wonderful, worthwhile and a privilege’.