With the prohibitions towards Mäori of the Foreshore and Seabed Act still fresh in their minds, members of the Eru Pomäre Mäori Health Unit of the Otago Medical School were surprised to discover a locked gate impeding their passage onto the beach at Flat Point last month.

The team had hired some newly opened cottages for a retreat and, as part of the rent, they received a key to the gate but believed that access to the beach was denied to casual visitors. 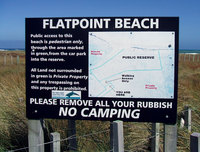 This seemed to them that the Päkehä owners of the land had done what Mäori were unable to do under the terms of the law, passed in November 2004.

The Act denied Mäori the ability to apply for the right to conduct any use of that part of the beach  between high and low tide and the seabed unless they can prove uninterrupted and unchanged historical use.

Päkehä, on the other hand, can apply for mining rights of the seabed, for example, in the usual way.

But, according to the owner of the land adjoining the beach, access is denied only to vehicles. Pedestrians can get to the beach from the car park which is ‘less than a minute’s walk away’.

Mary McGuinness, whose family owns almost 3,600 hectares of land along nine kilometres of coastline, says the gate across the road leading to the beach stops people taking four-wheel drive vehicles onto the beach to race.

This keeps the beach safe for walkers and swimmers. However, if a casual visitor to the beach wants to launch a boat, they simply have to ask at the nearby house for a key.

Mary McGuinness says it also prevents people loading up their cars with illegal numbers of paua and crayfish. ‘The fisheries people are all for it,’ she says.

She points out that before the McGuinness family put the road in, there was no public access to the beach. When they applied for resource consent to do so, some three years ago, a number of appeals took the case to the Environment Court and the High Court but each time the Carterton District Council’s decision to grant consent was upheld.

Bridget Robson of the Eru Pomäre Mäori Health Unit said her team was not aware of the car park or the pedestrian access. And she said the many ‘private property, please keep off’ signs were quite intimidating.

So what has happened since the Foreshore and Seabed Act was passed?

A documentary film, ‘The Last Resort’ [2006] has the minister for land information, Pete Hodgson, saying in a 2005 interview ‘If you don’t know what bit of land you own you can’t sell it, you can’t divide it, you can’t put a fence around it, you can’t really do anything.

‘Between now and 2020 we are going to map accurately our ocean floor and also get a sense of what mineral wealth there must be there.’

When Wel-com asked the minister’s office whether the government needed the Foreshore and Seabed law so that it could then sell the rights to mine the seabed, a reply from the attorney general’s office denied this.

The Foreshore and Seabed Act was passed in 2004 amid extensive protests, under government pretext that it needed to preserve the traditional Kiwi holiday at the beach. The government maintained that if Mäori were allowed ownership of the beaches, they would deny access.

Mining rights, the statement from the attorney-general’s office says, are accorded under different legislation and title to them does not depend on ownership of the land.

The New Zealand Bishops’ Conference said in its submission against the foreshore legislation that it ‘should not be passed in the face of its overwhelming rejection by Mäori, as indicated by the consultative hui in 2003, and the submissions to the select committee [in 2004].

‘The Crown is required by the Treaty of Waitangi to act in good faith towards Mäori, which must mean honest dialogue with Mäori when their rights to property are at stake … commitment to the Treaty is fundamental to the well being of our country, which is therefore harmed when legislation appears to over-ride Mäori rights and interests.’

The bishops called for political leaders and their parties to move aside from fixed positions on the issue believing that a ‘mutually agreed solution can be negotiated between Mäori and the Crown.’

Meanwhile, the signs of Māori being disinherited through this law are numerous with disparities in health [see story page 11] and in education.

Last month a report on the comparative educational achievements of Mäori boys brought a damning indictment on the education system.

Statistics in the report showed that in 2005, 53 percent of Mäori boys left school with no qualifications.

This contradicted figures released by Education Minister, Steve Maharey, showing that in the decade to 2005 the percentage of Mäori students leaving without some qualifications fell from 40 percent to 25 percent.

However, ‘qualifications’ included anything up to 79 credits in NCEA. A student needs 80 credits to pass level 1 NCEA.

But Dr Bishop has proposed a solution which has been trialled in six schools and will be extended to 33 this year.

The Waikato Times reports that the Education Minister is due to release a report this month on the progress so far.

The solution involves almost one-on-one teaching. Instead of teachers conducting classes from the front of the classroom, they move around between students who are sitting in groups of two or three and engage them in conversation about the project on which they are working.

To reach this solution, Dr Bishop conducted a survey interviewing hundreds of Mäori students in five schools. The Waikato Times reports that researchers came to the conclusion that their relationship with teachers was ‘pretty awful’.

Dr Bishop’s plan has been to change that relationship.

Teachers’ failure to pronounce names properly and some students’ feeling that teachers didn’t know them well or picked on them unfairly were common complaints.

‘We disrupt the class. Yeah, but some of us have good answers and we never get to say them. Yeah, but the teacher doesn’t know that. They just think all Māori will answer questions stupidly.’

The Waikato Times reports that though personalised learning is not new, a key advantage of Te Kotahitanga ‘appears to be the resources going into support and training for teachers’.

So far the Education Ministry has provided $5 million for the university to develop the programme.

Caritas, Catholic submissions and statements on the Foreshore and Seabed Bill, 2004