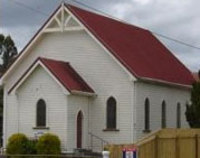 On the 17 March, St Patrick’s parish, Seddon Street, Raetihi, was 100 year old and celebrated the occasion on Sunday 25 with Mass at 11 am followed by a luncheon.

The little church opened in the main street of the township on the feast of St Patrick, 1907.

Milling had begun in the town in 1893 and by 1896 the population was growing as people came looking for work at the timber mill. The Marist priests from Jerusalem had regularly ridden on horseback the 25 miles to serve the population. After some days with a Raetihi family they would go on to Ohakune, Rangataua and Karioi, then north to Ohura visiting and saying Masses before riding back to Jerusalem after three weeks’ travel.

Archbishop Redwood arrived in Raetihi to open the church and found the settlement in a primitive state of formation with only one street but he noted the township was thriving with mills. The church was set among the stumps and a cottage on the hillside above had been built for the priests. The main trunk railway line, only seven miles away, was to open in 1908 linking Wellington and Auckland.

Sunday 17 March dawned misty and wet but this did not deter the large crowd of Catholics and non-Catholics from all over the district. The bishop spoke of the generosity of the gifts for the church as well as the table of good tastes. A fundraising bazaar in the preceding months had paid off the debt over the church.

The first baptism was recorded in May 1907 but the church had to wait another nine years for its first wedding. A large choir, drawing singers from other churches, sang in the church every week.

Just 11 years later the church and presbytery were burnt to the ground in the great fire of 1918 along with several other buildings.

A new church and presbytery were built on the site within five years and Masses and other ceremonies were held in the Theatre Royal in the interim. In 1918 the diocesan priests took over the parish from the Marists and they located in Ohakune, Father Guinane becoming the first parish priest and he was responsible for the building of both the presbytery and the school in Miro Street. A convent was bought nearby and the Sisters of St Joseph came to teach school. Father Guinane continued to visit the northern end of the parish using a jigger, to save his horse the hard journey.

The present church in Raetihi was opened in November 1923 by Archbishop Thomas O’Shea. It was built of heart rimu timber donated by Mr John Punch [the writer’s grandfather] for £1,430 and began life debt-free, thanks to his beneficence. It contains a priceless set of 15 stained glass memorial windows dedicated to the early parishioners – the only church within the Ruapehu District to have a complete set.

Throughout the years of the 1920s and 1930s large numbers of people attended Mass there. Farmers used to milk their cows before walking many miles to attend Mass, returning home in time to milk again.

Missions packed the church every four years. After the Second World War, Raetihi’s prosperity boomed and the 1950s saw a permanent population making their homes in the town. The Marist priests continued to visit the Waimarino monthly serving the Māori people well.

The Sisters of St Joseph, who were stationed in Ohakune, played a big part in educating the children after Sunday Masses. From 1918, when they opened a school in Ohakune, they visited and taught catechism fortnightly in Raetihi until they closed the convent in 1978.

St Patrick’s Church is one of the older buildings in Raetihi because many others date from the time of the 1918 fire.