A life of turmoil with a grandchild in the house or a relaxed yet ordered existence with just two teenagers to deal with – there’s no contest, you would think, but now that she’s an adult, my husband and I would not swap the last 20 years for anything. 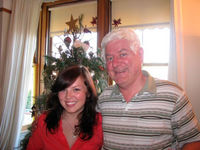 My husband Tim was way ahead of me in the role of raising ‘extras’ because 31 years ago he married into a ready-made family including my nine-year-old daughter and my late husband’s two aged seven and four.  Little did we realise on our wedding day that we would be raising children for another 30 years.

Emily and her mum, my daughter, lived with us for her first 16 months.  It was lovely to have a wee babe in the house and she had two doting adolescent aunts to play with. But, for the four years after that, they lived a very unhealthy lifestyle in several places while we, the grandparents, begged social services to intervene and endured being brushed off as interfering ‘olds’.
Eventually a school principal blew the whistle and we found ourselves with a distraught, traumatised and confused little girl who became our responsibility overnight.

For the next 14 years we all struggled to create an environment that could accommodate a child in a family of adults and teenagers. The hardest part was trying not to speak badly of either of her parents in her presence and holding back from the role of parents. It was hard knowing that she always had to talk about Nana and Granddad when her friends were talking about Mum and Dad.

We also had to totally reconfigure our long-term plans. The dream of the big OE and of retiring at 60 went out the window. Money had to be reallocated for schooling, medical expenses and being a teenager.

But life was too busy to think about money, and too filled with the energy required to heal a fragile, angry and hurt little girl. We just got on with it and never ceased to be grateful for the support of family and friends who gave us breaks and made sure that Emily had plenty of people to play with.

Our rage at both of Emily’s parents for not providing her with a decent life eventually gave way to sadness and disappointment. They have not been privy to her wonderful humour or able to admire her tenacity and accomplishments. Better to simply enjoy her abundant talents.

Last year, our granddaughter finished school. At the pre-ball, I shared a few tears with a mother who had been a staunch support to us throughout those years. We recalled how ‘our little girls’ had overcome all sorts of hurdles. Whatever my role, this was a passage in life to be celebrated and I was overcome with love and pride.

Now we often enjoy the company of a grownup and independent Emily who takes responsibility for all aspects of her life. Do we have any regrets? Definitely not! Would we have gone through this if we had been able to see into the future?  In a heartbeat!

There is nothing more rewarding than seeing a broken wee girl grow into a hardworking, loyal, tenacious and generous young woman with an amazing sense of social justice.

Raising Emily has been far more challenging than raising our own children but the parish and school community support has been vital. As a community, we have been blessed.