The widespread revelations about sexual abuse and cover ups within the Catholic Church, have uncovered deep trauma among those who have suffered abuse and by the entire community of the ‘people of God.’ It is important to be aware of ‘vicarious trauma’ which can be suffered by those dealing directly with abuse revelations and counselling. The Church will not be good at helping sufferers of abuse if those who are working on the front line of abuse are not cared for, and who instead may burn out.

In the following article by Catherine Sheehan, Trauma psychologist, Angela McCabe provides insight into how Australia’s Royal Commission into Institutional Responses to Child Sexual Abuse has caused widespread trauma not just to victims and survivors but also to the Catholic Church as a whole, both laity and clergy, and to the wider community. Of particular interest, is her work with priests, providing them with support and education around identifying signs of trauma in others and recognising vicarious trauma in themselves as well as self-care.

The article was published 7 August 2019 by the Catholic Voice, for the Archdiocese of Canberra and Goulburn and is reproduced in WelCom with the publisher’s permission. 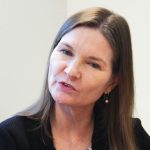 According to consultant psychologist, Angela McCabe, trauma is something that can be experienced simply from listening to another person describing his or her own traumatic event. This is what is termed ‘vicarious trauma’.

‘If we sit and listen to traumatic stories over and over again or deal with people who are distressed it actually has an impact on us,’ Ms McCabe said. ‘That impact can affect your spiritual life quite deeply because you can feel a lot of distress yourself, and you can feel helpless to support the person in their pain. You may wonder if there is a loving God, for example, or you may question yourself, question your belief system.’

After working as a nurse for 12 years, Ms McCabe became a registered psychologist in 1996. She specialises in the prevention of, and recovery from, betrayal of trust behaviours and traumatic injury.

She said the findings of the recent Royal Commission into Institutional Responses to Child Sexual Abuse had caused widespread trauma not just to victims and survivors but also to the Catholic Church as a whole, both laity and clergy, and to the wider community.

‘I think a lot of people have had spiritual trauma. It’s rocked their faith,’ she said. ‘It’s affected the whole community profoundly, not just the Church… It’s a community trauma.’

As a member of the Canberra and Goulburn Archdiocese’s Professional Standards Advisory Panel, Ms McCabe works in the area of risk management in respect to ‘betrayal-of-trust crimes’.

‘One of the reasons that child sexual abuse is so heinous is it’s such a profound betrayal of trust and when a member of the clergy or someone in a trust position commits it, it is more than psychologically and physically violating. I would take the step of saying it’s spiritually violating. It’s a very, very profound injury.’

‘The Church has learnt the hard way about failures of leadership on this issue and needs to be very proactive about identifying the risks, understanding the risks and managing the risks and working closely with the wider community, such as the police, in dealing with this.’

Like other traumatic events, sexual abuse may have permanent consequences for the victim, she added.

‘I would say an assault of that type, you’re not going to recover from it as if it never happened. It cannot be undone but you can heal and find ways to live better with it with the right support. I am humbled by how so many survivors have found the courage to speak up and to use their experiences to help others and to ensure it never happens again.

Ms McCabe has also worked closely with priests in the Archdiocese [of Canberra and Goulbourn], providing them with support and education around identifying signs of trauma in others and recognising vicarious trauma in themselves as well as self-care.

Priests are at ‘high risk’ of vicarious trauma, she said, because their ministry involves listening to the distress of others on a regular basis, making self-care vital to their welfare.

‘For anyone who works in the humanitarian field, or works intensely with people who are distressed, it’s an important consideration. You can’t look after anyone else if you can’t look after yourself. So the idea is if they’re in good shape both mentally and physically, they can provide more effective support to people who need them.’

At a recent clergy assembly, Ms McCabe alerted priests to the signs of vicarious trauma – difficulty managing emotions, difficulty making decisions, problems managing boundaries, over or under responsibility, problems in relationships, physical problems including illness and accidents, and loss of meaning and hope. Listening to a distressed person can have a physiological impact, she said.

‘If you’re sitting with me and crying, and I’m counselling you, I may not be crying too but my brain will be lighting up in the same place. This is because we have mirror neurons in our brain that enable us to feel empathy and respond to others with compassion.

‘If a counsellor or carer is doing this all day, day after day it can have an impact. It’s really important when they go home at night to eat well, that they sleep well, that they do things that are soothing and comforting. It might be exercise, meditation or prayer, watching funny movies.’

The crimes of others

Men enter the priesthood because they have a vocation and love the Church, she said, and because they want to help others. It is therefore devastating for them to learn that fellow clergy have committed heinous crimes.

‘When you find out there are people doing the wrong thing under the same guise, it really shakes your foundations. It feels very personally hurtful.’

Ms McCabe said it is important for compassion to also be shown towards clergy in light of the sex abuse crisis, and that investing in the welfare of priests was an investment in the welfare of every person in the Church. While the media focused predominantly on the Catholic Church throughout the Royal Commission, the sexual abuse of children is a widespread community problem and needs to be addressed as such, she said.

‘It’s easier to focus on one institution. It’s more comfortable to think bad things only happen in a defined place. But all of us need to step back and to be thinking about how we take care of our children.’

‘All human institutions have inherent flaws. Leaders and their teams need to self-reflect and work towards continuous improvement.’

‘Mother Teresa said, “do small things well”. And that’s what I’m trying to do. So hopefully for the people that we do engage with, and have some contact with, their day is a little better because we tried.’

St Teresa of Kolcata said, ‘Yesterday is gone. Tomorrow has not yet come. We have only today. Let us begin.’ Mother Teresa was canonised a saint by Pope Francis on 4 September 2016. Her feast day is 4 September.

The Church yesterday, today and tomorrow

NauMai September 2021 Catholics from around New Zealand have responded generously $15,000 for our flood-relief fund and the Tindall Foundation is set to make a further donation to help our…