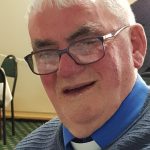 Bishop Charles Drennan, announced with sadness on Wednesday 24 January that Fr Don Hamilton sm had died at the Hawke’s Bay regional hospital in Hastings the previous day. Fr Don had been unwell for some time.

Bishops Charles said, ‘I extend our aroha and prayers to his Marist confrères, family and friends, and all those to whom he ministered so well during his many and varied years of priestly service. In our Diocese he has served in Whanganui at St Augustine’s College, at Paki Paki, in Waitara and Feilding, and in more recent years at Taradale, St Joseph’s Māori Girls College, and again at Paki Paki.’