Sunday morning Mass was celebrated for the last time in the little church of St Brigid in Wadestown on 8 July. The church is part of the Wellington West Pastoral Area and with one priest leaving last month and another due to leave in the next year, it was decided the pastoral area could not sustain the extra weekend Mass in Wadestown. 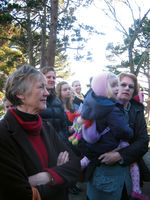 Parishioners have been absorbed into other parts of the pastoral area—Karori, Northland and the Cathedral parish.

The final Mass in the church was a sad occasion for the loyal and attentive congregation. Cathedral parish priest, Fr Maurice Carmody, was joined by assistant priest, Fr Seph Pijfers, who has moved to Northland parish as administrator, and Marist Frs John O’Neill and Brian Wysocki who have also had a long association with the parish.

After parishioner, Tony Mahoney, had provided the congregation with a brief history of St Brigid’s, Fr Pijfers lead the congregation outside for a final farewell to the familiar gathering areas around the church where parishioners had gathered to play and to converse after masses over the almost 100 years of its existence. 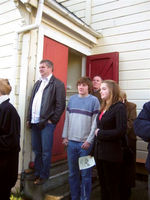 Fr Carmody then told the packed church this was the hardest thing he had ever had to do as a priest.

He reminded the congregation of the time of Pope Innocent IV [1243 – 1254] when the church was in disarray and it was from the grassroots that the clergy and laity together renewed the church —this story had come to mind as he was preparing for this last celebration.

‘In a very real sense we are [again] at a crossroads in our church,’ Fr Carmody said while acknowledging the temptation to give up in despair.

But just as in the time of St Francis of Assisi [1181–1226] when the then pope spoke out, so too in our time, Pope Benedict XVI has noted the risk of churches weakening their missionary effort just when we need to open ourselves in trust to God. 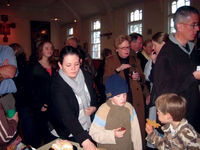 Pope Benedict said recently that he hoped missionary cooperation, even in lands evangelised long ago, would be intensified and that the most would be made of the potential of each one.

We must ask ourselves, Fr Carmody said, what the word of the Lord is for us as we close our church.

Much effort had gone into training lay leaders. ‘Mutual cooperation and collaboration in ministry is vital to the future, but these cannot progress if one of the partners is missing,’ he said. 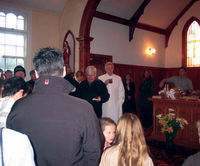 Aotearoa New Zealand has a large number of cultures, particularly from the Pacific and Asia and there are priests from these cultures ministering to their communities here. ‘In this moment of crisis perhaps we should build on this foundation, calling suitably prepared priests from these regions to minister among us in a spirit of mutual ministry and collaboration,’ Fr Carmody said.

The ceremony concluded with morning tea, arranged by the organising committee. Peter Churchman spoke on behalf of the parish, thanking the community and urging optimism at this time of new beginnings.