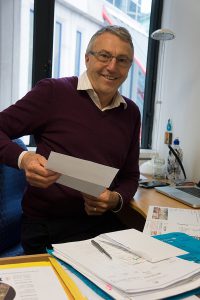 Legislation to ensure fair standards for all fishing crews
in New Zealand is the first of its kind in the world says
Fr Jeff Drane.

On Sea Sunday, 10 July 2016, churches all over the world come together to remember seafarers and pray for them, their families and those who support them.

The message for Sea Sunday 2016 from the Pontifical Council for the Pastoral Care of Migrants and Itinerant People refers to the humanitarian emergency in the Mediterranean Sea where the crews of merchant vessels have been in the front line to intervene and rescue thousands of people trying to sail to Europe on board overcrowded and unseaworthy vessels. (See message at tinyurl.com/apostolato-del-mare).

In a crackdown to stamp out unsafe and, at times, inhumane labour practices in this country, all foreign fishing vessels fishing in New Zealand waters must now be reflagged with the New Zealand flag.

The substantial law-change came into effect earlier this year, after a four-year transition period, and means all vessels operating in New Zealand waters must follow New Zealand law.

In New Zealand reports of crews being beaten and forced to work for minimal pay, and for days without rest, have not been uncommon in recent years.

Reflagging gives full jurisdiction over areas like employment, and health and safety conditions on vessels fishing in New Zealand’s Exclusive Economic Zone. The reflagging is carried out by Maritime New Zealand and requires operators to ensure fishing vessels fully comply with our maritime rules and the Health and Safety at Work Act. It also requires the crew to have appropriate New Zealand-equivalent qualifications.

This legislation, to ensure fair standards for all fishing crews in New Zealand, is the first of its kind in the world.

It makes New Zealand a world leader in addressing this global problem says the national director of the Apostolate of the Sea (AoS) in New Zealand, Fr Jeff Drane.

He says Fr Bruno Ciceri, a representative of the Apostleship of the Sea International at the Holy See’s Pontifical Council for the Pastoral Care of Migrants and Itinerant People, and the work of AoS, helped to convince the New Zealand Government of the need for such legislation. Ciceri has written a book, with Alistair Couper and Hance Smith, Fishers and Plunderers: Theft, Slavery and Violence at Sea.

Fr Drane said, ‘Because AoS is a widespread global apostolate we have to address the serious issues of fisheries globally. The AoS and the Catholic Church globally are active in addressing issues such as fishermen being underpaid and exploited; being subject to physical and sexual abuse; working on board rusty and unsafe fishing vessels; fishing vessels flying under flags of convenience; with no adherence to the law of that country, these fishing vessels exploit the fish stocks; indiscriminate taking of fish stocks amounting to theft from properly registered and controlled fishing businesses and theft of fish resources from indigenous peoples.

‘The International Maritime Labour Convention has given some power to nation states to deal with injustices in relation to seafarers’, says Fr Drane.

‘Today, there is a new concern relating to fishing vessels. With new measures to prevent human trafficking and refugee transportation by sea, illegal traffickers are now targeting fishing vessels because ships operating under the International Maritime Labour Convention have begun to address this problem and have taken steps to end trafficking practice on their ships’.

AoS South Asia has organised a global Fisheries conference in Bangkok in June and another next year in Taiwan. AoSNZ delegates, including Fr Jeff Drane and Rose Celeste – Wellington-based national co-ordinator for AoSNZ Filipino members living in New Zealand – are attending both conferences, with a view to actions to take.