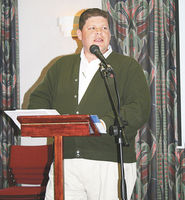 The practice of stewardship within parish communities is being promoted with the visit in July 2010 of American catechist Tracy Welliver here primarily to speak at a conference in Brisbane.

Stewardship has been around since the beginning of the second Vatican Council but really began to be practised in parishes at the start of the 1990s.

The story of the Good Samaritan (Lk 10:25-37) is an example of how stewardship works because the Samaritan gave his ‘time, talent and treasure’ and showed through his commitment to return in a few days that he was ready to support the victim for the long haul.
Everything – time talent and treasure – given to the parish is gift.

Welliver has been working in catechesis for the past 16 or so years in a parish of around 1400 families. But his life has changed since working specifically on stewardship in the past six years and the shift in attitude to his gifts and to sharing them for the glory of God.

‘It’s changed my relationship with my children. I don’t love them more, but now I see them as the great gifts that God has entrusted to me and it is remarkable how I long to be with them and to share with them more than I did before because of the almost subtle change in how I see them.’

One of the important messages of stewardship is that people are happiest when they are giving.
Welliver uses the analogy of filling someone’s bucket – people are happiest when their bucket is filled.
‘But the extraordinary message about that is that to have your bucket filled doesn’t necessarily depend on everyone else. Everytime you put something in someone else’s bucket a drop goes into your own.’

Through random acts of kindness, people can be fulfilled themselves because they are using their talents for others and ultimately for the glory of God.
‘We can think of people who might not be the best liked but are as happy as can be because they spend most of their lives filling other people’s buckets. People don’t realise the impact they might have on themselves – you get more back from giving than you give.’

Education was a vital part of promoting the stewardship message. Parish leaders were obliged to use every opportunity to encourage people to share their gifts with the community. But sometimes the community could miss out on the gifts of its members because the individuals could not identify their talents.

Welliver asks people in his meetings to think about ‘what you really like about yourself’.
‘It’s extraordinary to work with people like that to uncover their gifts. God has given everyone gifts. It’s a matter of being open to the gifts in yourselves.

‘If you are using your talents, that is usually when you are happiest and most energised.’

Welliver says that for the first time in the past 15 years since stewardship has been promoted, church communities are starting to ‘take it seriously and really trying to catechise the faithful’.

‘In one of the seminars we talk about how people can have all of the information at their fingertips but they still don’t get it. You really have to get into someone’s heart to teach it to them.’

He says with religion being questioned more and people yearning for something more, it’s time for those who call themselves disciples ‘to show themselves and the world what a difference it makes’.

Hospitality and celebration were an essential part of nurturing stewardship in a community, he said. It was important to get the whole community together whenever there is an event to celebrate being together. The positive energy that comes from such a gathering encourages people to share their gifts.

‘It is about always honouring a parishioner as priest, prophet and king. You treat your parishioners as almost royalty so that they understand that what they bring is of such great value.’