WelCom November 2017: Whānau and friends gathered in their hundreds to join with the Sisters of Compassion in a day of celebration on Saturday 14 October at Our Lady’s Home of Compassion in Island Bay. They came from near and far including from Jerusalem – Hiruhārama – Suzanne’s a holy place.

The day began at dawn with a Karakia Whakatūwheratanga to bless Suzanne Aubert’s, Meri Hōhepa’s, final resting place in a new side chapel. The solemn and beautiful celebration was led by the Mana Whenua as everyone was welcomed and processed up the pathway through newly landscaped gardens to the chapel where Suzanne Aubert has been laid to rest. Spencer Carr, Jamie Tuuta and Kura Moeahu spoke on behalf of the Sisters and mana whenua (the home people). Trevor Himona from Wellington, Ron Hough and Che Wilson from the Whanganui River gave the whaikōrero for the manuhiri (visitors).  The whaikōrero (speeches) acknowledged the virtues of Meri Hōhepa, her writings, rongoa, her help for the poor and her work with Māori. Iwi Mana Whenua leaders and Cardinal John blessed the magnificent crypt and the Resurrection window – gifted by the family of the late artist John Drawbridge and the John Drawbridge Memorial Trust Board.

“Thanks be to God for all he has done and is doing for us.”

The rededication of Our Lady’s Home of Compassion was followed with a blessing of visitor and pilgrim facilities and the gardens outside. A Miha Māori (Māori Mass) to celebrate the 125th anniversary of the founding of the Sisters of Compassion, and during which the sisters renewed their vows, concluded the celebrations. 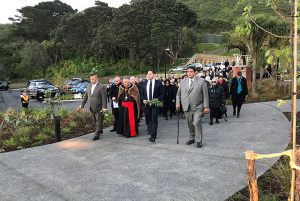 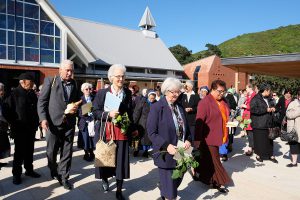 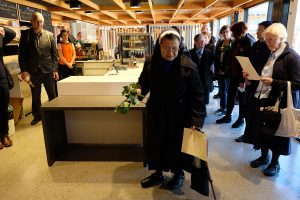 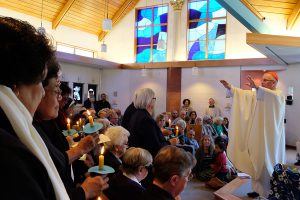 Cardinal John Dew blesses the Daughters of Our Lady of Compassion as they renew their vows.

Congregational leader Sr Margaret Anne Mills spoke of the Sisters challenging origins and how in 1892 Suzanne travelled from Hiruhārama to Wellington to see Archbishop Redwood about establishing a congregation. Archbishop Redwood said to Suzanne, ‘Since you are called to be compassionate every
form of human misery, your title must be “Daughters of Our Lady of Compassion”.’ Suzanne was speechless with surprise and joy. She recognised the choice of the name as God’s and considered Archbishop Redwood as the Founder. The small group was canonically recognised on 14 September and Suzanne Aubert was appointed the first Superior on 14 October 1892.

Cardinal John Dew said, ‘The ceremony for the rededication of Our Lady’s Home of Compassion and the blessing of the final resting place of Suzanne Aubert and the Resurrection window was a very moving reminder that while we hope and pray that Suzanne Aubert will be canonised, her spirit and legacy has been among us for 125 years. That spirit has taken new forms as the Sisters of Compassion have changed their ministry in response to changing times, because their charism of compassion is needed in every age.’ 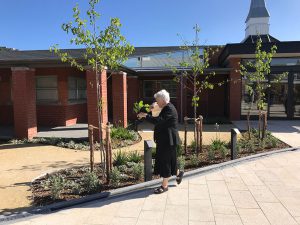 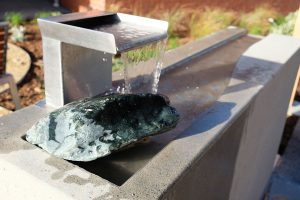 Gerard McGreevy, Chief Executive, said, ‘Our Lady’s Home of Compassion meets a very important spiritual need in today’s world as a place of prayer, pilgrimage, retreat and respite. It is a place ideally suited for both day visits and longer stays. People can refresh and recharge here. And it is still the Mother House of the Sisters of Compassion ‒ the place founded by Suzanne Aubert in 1907 to continue the mission of meeting the greatest needs of the day.’

“Let us always be kind, equable, patient and accessible to everyone.”

Guests stayed on to relax and enjoy hospitality in the beautiful and tranquil grounds and spaces ‒ an environment created in keeping with the Sisters practice of simplicity and hospitality to provide a
place where all people feel truly welcome. 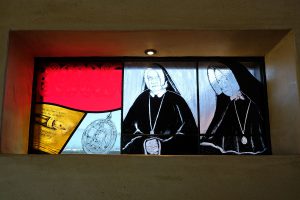 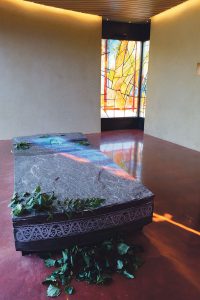 The Resurrection window over the Suzanne Aubert’s resting place in the side chapel.