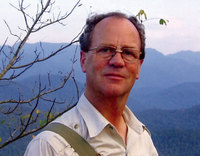 There were 32 killed in one incident last month who never lived to fulfill their vocations. We saw their faces on the TV news. They were mainly young people who had lost their lives at the hands of another young student at an American university. Their individual callings had lead them all to study or teach at the same university, Virginia Tech.

From the extensive newspaper and TV coverage we learned their names, their ages and that they hoped to follow vocations including as lawyers, teachers and engineers. US President Bush attended their memorial service for the grieving families and friends.

But the death toll of innocent civilians killed in Iraq at the hands of the US administration’s illegal and immoral war is well beyond 32 at the American university, and may be well beyond 32,000. Although there are so many of them we do not know their names, their ages, or their vocations. We have hardly seen a single photo of any of them – but they also have friends and families who are grieving for them.

Just like the students at the US university and the many thousands killed in Iraq, we all have a vocation – our own individual callings.

As Christians we are encouraged to pay particular attention to listening to our callings.

Earlier last century Belgian Cardinal Joseph Cardijn’s calling came to him through the sound of shoes clattering on the cobblestones outside his window – the shoes of the children hurrying to work in the nearby factories.

The discovery of his own vocation and then working with young workers to discover their own vocations, led to the See Judge Act method and “review or life” of the Young Christian Workers movement.

We can also use this method. What can we see in our daily lives or in the world around us? For example can we see an increasing gap in the distribution of wealth, power and access to housing in this country?

We can reflect on and judge whether we believe the structures of our societies are just and equitable – at our neighbourhood or workplace levels – or at a national or international level.

And then we are called to act as our faith and conscience leads us.

Our vocations may have led many to help turn the tide against the Vietnam war, or apartheid in South Africa and supported the compensation for land grievances and confiscations here at home. Many have been involved in small actions in their everyday lives.

But are we doing enough about the loneliness of so many individuals in our communities? Are we active enough in building a just society in our own country? What can we do to promote peace and end wars we see on our TV every night?

Can we hear the sound of the shoes on the cobblestones leading us to be clearer about our own vocations? Many parishes have their own social justice groups. In Wellington the Catholic Peacemakers group has been meeting regularly to see, judge and act on some of the issues we see around us in our daily lives today – from local housing and health issues to international peace and justice activities.

John Maynard is a member of Wellington Peacemakers and of Te Kainga.