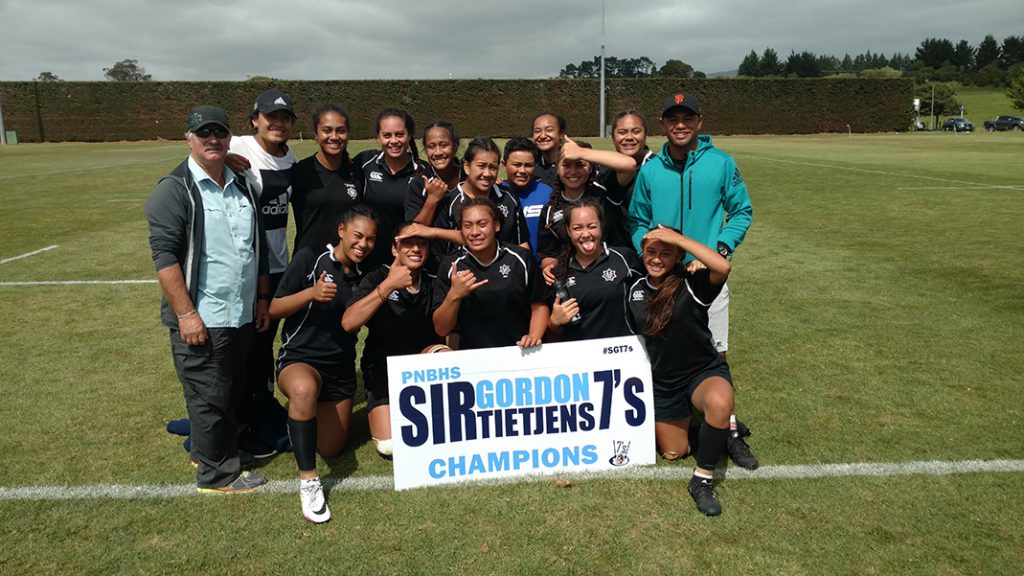 St Mary’s College rugby seven’s team won the Condor Sevens National Secondary School Championship last year. They are the first Wellington team to achieve this championship title. Their win has earned them the right to represent New Zealand at the Sanix World Youth Cup in Fukuoka, Japan, in April 2017.

Team manager, Mark Hurley, said, ‘The team started an amazing journey less than two years ago when it was first formed, and last year the girls went through the tournament unbeaten. Over the six tournament games played, they conceded 12 points and for the first five games there were no points scored against them. They scored 200 points all up, which is an amazing achievement for such a competition.’

The team has been working hard to raise the $30,000 needed to go to Japan this month. For some families the amount needed to travel is a big challenge.

Part of the girls’ success has been their coach, Tuga Mativa, and his friend All Black Ardie Savea.

Savea thought he’d go down and help Mativa out occasionally. Instead, he’s there every Monday and Wednesday as his schedule allows.

‘I got hooked onto how good the girls are and how awesome it is to be a part of everything,’ said Savea.

‘When I first came all the girls weren’t talking, they were a bit shy…none of them knew how to pass a rugby ball.

‘They were all girls from basketball and netball who’d never played rugby before. But they were just so skilled and so talented and we just tried to teach them.’

St Mary’s College celebrated their team’s success at a special assembly in February this year. Their winning form has continued recently at the Sir Gordon Tietjens Sevens’ Tournament last month.

Mark Hurley says, ‘We have a GiveaLittle page running to help raise funds towards this venture. Any amount no matter how small or big will be gratefully accepted.’ (givealittle.co.nz/cause/stmaryswellington)