The time has come when I have been called on to deliver on a promise. So said Wellington South lay pastoral leader Karen Holland to the congregation at St Anne’s on January 17.

Karen promised her sister-in-law, Jan, that if Jan lost her hair through chemotherapy for bowel and liver cancer, Karen would shave her head in solidarity. 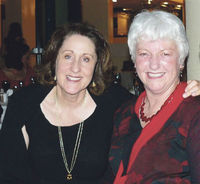 Karen told the congregation about sharing gifts and how, over the Christmas break, she had become more keenly aware  of the gifts of family, friends and the people of St Anne’s, Newtown. She asked them to share with her their gifts of understanding and support as she continued her story.
‘Today we live in a world where personal gifts often remain hidden, where the Kiwi way is to see the expression of God-given gifts as embarrassing or showing off and so fear takes over and, in the end, we return our gifts to God unopened.’

(Karen is pictured, above left, with sister-in-law Jan in a new year shot, and below, with hairdresser, Rachel Dallas of Haight Ashbury, the salon which sponsored the fundraiser.)

In the past three years Jan has had two bouts of surgery and three treatments of chemotherapy through all of which her hair stayed intact and so did Karen’s. However, last October Jan announced that the tumour had returned and she needed more chemotherapy to prepare for more surgery. This time a more aggressive treatment ensured that her hair started to thin. It was time for Karen to revisit her promise.
‘In spite of feeling quite scared myself because I know it will not be glamorous, I made a promise and I intend to follow through.’

Karen said some people had advised that this was not right but she said knowing that she was not alone in losing her hair had had a tremendous effect on Jan.

Now Jan has asked that the sisters use the ‘shave and shave alike’ event to raise money for the Cancer Society in Wellington and in Nelson, where Jan now lives.

‘Wow, all this pain and suffering and she wants to do something for someone else!’ says Karen.

The shave took place on Tuesday February 2 and donations can be made at www.fundraiseonline.co.nz/JanHolland