Students at St John’s College continue to gain recognition for their business and social enterprise projects and initiatives. These include water-quality and weather-forecasting systems and community-based partnerships. 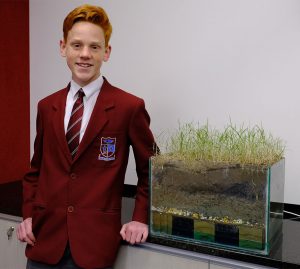 Ayden Wilson, year 10, is involved in developing a water-quality project.

‘George’ is a low-cost device invented by the students and teachers. ‘George’ detects flooding levels for holiday homes and farms and sends an alert to the owner’s cell phone. The students’ goal has been to produce the best weather monitoring device in the country as adverse weather patterns in New Zealand and the South Pacific are becoming more frequent.

Project directors are continuing to refine and innovate the device. They have a commercial relationship with Ravensdown (NZ). All profits generated from ‘George’ will be gifted to Whatever It Takes (WIT) – Hawke’s Bay’s largest peer provider of community-based mental health and addiction services.

‘The students are demonstrating good corporate behaviours in engaging with those on the margins within the community,’ says St John’s College principal Mr Paul Melloy. ‘I’m incredibly proud to see our young men fully engaged in a project that supports social justice in the community to make a difference.’

Year 13 student Jack Gardner says, ‘I’ve personally been able to understand a whole new way of life and a different point of view. For me, it’s been about gaining another dimension that life isn’t always perfect for people.’

“St John’s College was the only school in New Zealand to send a submission to the Government Inquiry into Mental Health and Addiction. 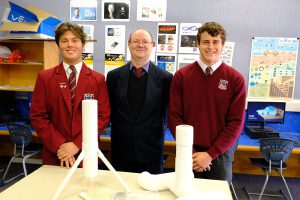 The students’ experiences with the marginalised prompted them to send a submission to the Government Inquiry into Mental Health and Addiction this year, the only school in New Zealand to do so. As a result, Inquiry representatives met at the college in June. Chaired by Auckland University law professor Ron Paterson, they heard students and WIT clients speak about the lessons and enrichment that have occurred as a result of this unique partnership.

‘They were very happy with us being the first school in New Zealand to be involved like this and were astounded by what we are doing – in word and in deed,’ said year 13 student Ben Gardiner. 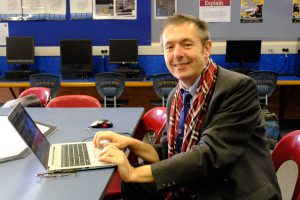 Mr Melloy said, ‘Students had to overcome personal barriers of fear and a lack of understanding. If prison and mental health engagement in our community can happen here at St John’s, other schools can grow from this kind of engagement too.’

Teacher, Mr David Ivory, has instigated many of the projects.

Mr Melloy said, ‘We have a revolutionary teacher in Mr Ivory. He brings out the best in his pupils, with a clear sense of equity and fairness. I am immensely proud of what he has achieved; last year in partnership with Hawke’s Bay Prison, and this year with WIT. He doesn’t stop; he is already engaged in the next project.’

Mr Ivory and the students are developing a National Poverty Index (2018), which will be launched in September together with the Mayors of Hastings and Napier. 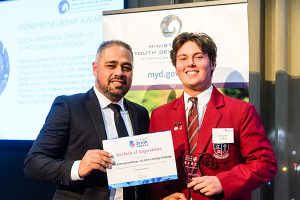 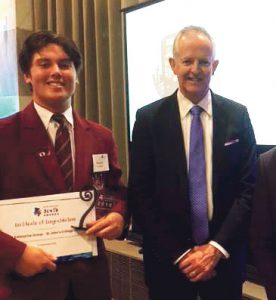 Mr Ivory said, ‘This Index is our collective effort to label the issue of poverty, using an evidence-based approach with the hope it can be the basis of good, quality discussion locally and nationally with the end game of reduced poverty levels.’

St John’s College achievements have been recognised this year with a number of awards: