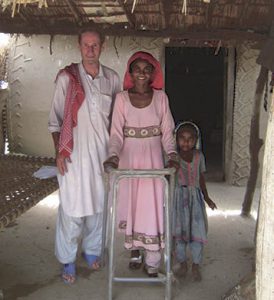 Fr Dan O’Connor from Hokitika on the West Coast, has been working as a missionary priest in Pakistan for many years and is parish priest in a southern part of Pakistan. Photo: Supplied

This year we are celebrating the centenary of the Missionary Society of St Columban.

In 1918 two young Irish priests – Ned Galvin and John Blowick – met in Dublin and put together a proposal to establish a missionary organisation whose aim would be to send priests to China to preach the Gospel of Jesus Christ. At that time the world was at war and Ireland was fighting for independence. In these circumstances going to China seemed, as Ned Galvin later said, a ‘mad thing to do’. Yet it was also an amazingly bold and inspired enterprise, an impossible dream and a splendid cause that captured the imagination of people living through difficult and depressing times.

This was the beginning of our Columban Missionary Society’s extraordinary story.

What has been New Zealand’s contribution to this story? Of the 1400 Columban priests in 100 years there have only been 52 from New Zealand. Presently, there are 15 of us living and working in various countries around the world. We have come from all parts of New Zealand. The first group of three New Zealand Columbans were ordained at our seminary in Ireland in 1935.

Over the years the greater number of New Zealand Columbans have been assigned to Korea – 13 in number. This is followed closely by the Philippines with 12 and then Japan with 8. The remainder have also worked in Burma, Fiji, Chile, Peru, Pakistan, Taiwan and Brazil.

New Zealand Columbans have entered very much into the life and culture of the people among whom they worked, some becoming well-versed in local languages and others have written extensively about their cross-cultural mission experience. Some were called to stand with their people through times of war and political turmoil, even suffering the experience of internment in prison-of-war camps. Others endured loneliness in isolated mission stations. Some contributed to the social development of deprived communities and risked the consequences of speaking out against unjust systems and corrupt governments.

The first New Zealand Columban to die was Fr Francis Douglas. We do not know the details of his death. His body was never found. His presumed date of death is 27 July 1943.

This is the date we have chosen to celebrate the centenary of our Society. We are grateful to Cardinal John Dew who will be the main celebrant at the 6.30pm Mass at Sacred Heart Cathedral on Friday 27 July 2018. Please feel free to join us in celebrating our centenary, in remembering our story and giving thanks to God for the great privilege to share in the mission of his Son, Jesus Christ.

Fr Tom Rouse ssc is the Mission Coordinator for the St Columban Mission based in Lower Hutt.