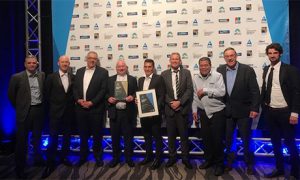 Entered in the Heritage and Restoration category, the St Mary’s project took out both Gold and Category Winner medals. The awards were announced on 18 May, at Sky City, Auckland.

In making the awards, the judges commented ‘the outcome was a finished church that looked identical to the original.’ And, ‘It will stand the test of time.’

Brian McGuinness, Managing Director of construction company LT McGuinness, is thrilled to win the award. He described the job as a ‘heart and soul project.’ With considerable budgetary constraints and funding provided by personal and community donations, Mr McGuinness said the project was very different.

Fr Barry Scannell sm who oversaw and fund-raised for the seismic strengthening of the Church, is excited by the award. ‘It’s a fantastic recognition, particularly for LT McGuinness’, says the former parish priest, speaking on Sunday 20 May after Mass from his new parish of Napier.

On 16 May, Fr Scannell received the MNZM at Government House, Wellington, from Governor General Her Excellency The Rt Hon Dame Patsy Reddy, for services to the community and heritage preservation.

Due to Covid-19, WelCom is currently not being printed or distributed to parishes and schools. The April 2020 issue of WelCom is available online here.

We are still people of the Resurrection

WelCom April 2020: Resurrection and reconciliation – the magnificent Risen Christ and stunning blue stained-glass panels in the Kaiser Wilhelm Memorial Chapel in Berlin. The original Romanesque-style church was bombed in…

Living out our faith at home during Covid-19 lockdown

WelCom April 2020: New Zealand entered Alert Level 4 for Covid-19 on Thursday, 26 March 2020, in an effort to stop the spread of the virus. Cardinal John has been issuing…