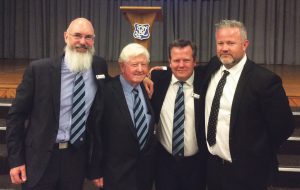 The Felix Kane Cup for the Old Boy of the Year was presented to retired Principal Family Court Judge Sir Patrick Mahony (Silverstream 1950‒53) for 2016 at the annual St Patrick’s College Old Boy Association’s dinner late last year. The award recognises an old boy who has ‘promoted the betterment of the people of New Zealand, fostered the Catholic way of life and carried the principles taught at the St Patrick’s Colleges into the community’.

Sir Patrick was Proxime Accessit in his final college year and was described as an outstanding law student at Victoria University. He went on to have a stellar career at the Bar and to become a recognised expert on construction law and contracts, corporate law, family law and mediation.

In 1978 he accepted an appointment onto the Bench in Auckland and was one of the original appointees to the new Family Court and its pioneering works. In 1985 Sir Patrick was appointed Principal Family Court Judge and set about continuing and promoting the reform of family law both in New Zealand and Australia and elsewhere.

As Principal Family Court Judge in this country (1985‒2004), Sir Patrick continued to develop family law in a thoughtful and principled way. He ensured these new ideas were transplanted to other countries.

Sir Patrick spoke at Family Court Law Conferences all around the world including the United Kingdom, Canada, Australia and America. He spoke about changes and new approaches involving collaboration with the legal profession and specialists in family law. He pioneered mediation, case management and continuing education for judges. He also led responses to domestic violence and was a leader nationally and internationally in implementing the Hague Convention on child abduction cases.

After retiring from the Family Court, Sir Patrick continued to contribute to New Zealand in many ways. He helped establish and still serves on the Institute of Family Studies at Victoria University.

He was awarded the Distinguished Companion of Order of Merit and a knighthood.