“Nothing else will change the world but people who fight for justice and human dignity. Following Jesus demands a good dose of courage, a readiness to trade in the sofa for a pair of walking shoes…”
– Pope Francis

Pro-Life Policies
“We hope for positive, pro-life attitudes and policies.”

Cultural Diversity
“We delight in the cultural diversity of contemporary New Zealand.”

Migration
“We envisage a nation that strives to welcome and appreciate migrants as an integral part of our nation.”

Safe Society
“We want Kiwi children and mokupuna to grow up in a safe society.”

Caring For Our Planet
“Care for our common home, Mother Earth is a centre stage global challenge.”

Fair Tax Structure
“We appreciate the work ethic of so many of our fellow citizens.”

Mental Health
“The wellbeing of all New Zealanders is of concern to everyone.”

Affordable Housing
“We support efforts to bring about affordable housing.”

Prison Population
“We are deeply concerned by the growing prison population in New Zealand.” 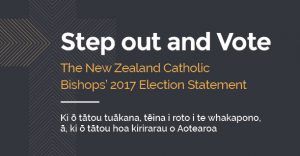 The New Zealand Catholic Bishops have issued an election statement for the general election in September 2017. Sent out to parishes and schools and posted online on Thursday July 6, the Bishops encourage Catholics in Aotearoa to make a difference through a considered vote at the election.

“As Bishops, we sat down recently and shared ideas about what kind of qualities and policies shape the vision we might have for New Zealand. We did so aware of our leadership role and that deep in every human heart there is a desire to contribute to the building of a nation in which all citizens – whānau and individuals alike – are valued and given equal opportunities to flourish.”

The Bishops ask, ‘Even when the choices to be made seem difficult or the questions to be asked too tough, are we tackling some of the big challenges facing us as a nation and as part of a global community?’

With the 2017 General Election in just a few weeks’ time – Saturday 23 September – the New Zealand Catholic Bishops’ message in their 2017 Election Statement is: ‘Step out and Vote’.

President of the New Zealand Catholic Bishops Conference Bishop Patrick Dunn says, ‘This is an opportunity for us all to reflect on the big challenges facing our society and ask tough questions, both of ourselves and our candidates.

‘Last year while speaking at an international youth event in Poland, Pope Francis warned the young of being couch potatoes and leaving it to others to decide our future.’

The Bishops’ Statement focuses on what they see as key considerations in shaping New Zealand’s future.

Bishop Dunn says, ‘What we’re not doing is giving preference to or offering opinions on political parties. We are, however candid on what we see as non-negotiables in a vision for our country.

‘These include the provision of affordable housing, ensuring a safe society, a respect for life, the nurturing of our environment and the care of refugees and asylum seekers.’

He says, ‘We acknowledge the different paths in working towards a just and peaceful society but, at the same time, we echo the words of Pope Francis that an election is not simply a spectator sport.

‘It is a wonderful opportunity and indeed our responsibility to decide who we feel best to steer the ship and guide the policy on the future course of this country. This is a time for us to reflect, discuss and debate on what sort of society we want New Zealand to be.

‘Stand up, uphold the common good of our nation, choose wisely, and your vote will be a blessing for our nation.’

‘We need to participate for the common good. Sometimes we hear: “a good Catholic is not interested in politics.” This is not true: good Catholics immerse themselves in politics by offering the best of themselves so that the leader can govern.’ – Pope Francis, 16 September 2013

The New Zealand Catholic Bishops released their 2017 election statement early July, in the lead up to the country’s general election in September. Entitled Step Out and Vote, the Bishops encourage Catholics as faith-based citizens to make a difference to New Zealand’s future through informed and considered voting. The Bishops articulate 10 specific ideas that encourage questions and thinking among voters to help ‘build a nation in which all citizens – whānau and individuals alike – are valued and given equal opportunities to flourish’.

WelCom spoke to Bishop Charles Drennan, Secretary of the New Zealand Catholic Bishops Conference, about the Step Out and Vote Statement.

Q: Who is this statement written for – has it been sent to Catholics only or has it been distributed more widely?

The statement is for everyone. Consequently we have been careful with the language used – accessible yet not banal. All Kiwis have a contribution to make to political debate, and an increasing number of voters are not mother-tongue English speakers – just like our congregations. So there is what we might call a conscious ‘humility of communication’ at work in this statement.

The structure, layout and wording of our statement is attuned to contemporary society. Also, we Bishops are very aware of younger voters thinking deeply about what kind of society they want New Zealand to be. Preparing to vote is then a formative experience for them, and indeed for everyone.

Q: Formation: that’s a slant on an election that some would not consider. Can you explain further?

We’ve noted that ‘your vote is a vote for New Zealand’. In other words, the choices we make for a party and a person should not reflect narrow. personal interests but should take into consideration the common good of our society.

It’s our faith that gives us the framework to determine the common – communal – good for Aotearoa. Just as faith is never purely personal and always communal and public, so too we must approach an election bearing in mind the whole nation – people, land and sea – and in a special way the marginalised or vulnerable.

Q: Has it been distributed to politicians and mainstream media?

Yes both. We have had a lot of acknowledgement from Members of Parliament. All of it has been positive and appreciative, except that of Mr David Seymour the Leader of the ACT party. Karl du Fresne wrote an opinion piece for various papers which entirely misrepresented the relationship between faith and politics. He chastised us for not nailing our faith to one political party. That of course would be an entirely inappropriate stance. Faith informs politics. It can never be reduced to politics, let alone one or two political parties.

Q: Where can people get a copy of the document?

Q: Why does the Church consider it so important for Catholics to vote in the general election?

Democracy has its roots in the Judeo-Christian vision of life, with our emphasis on upholding human rights and freedom of expression etc. In many countries this does not exist. So the Church teaches that with the privilege of democracy, there comes certain duties. The most fundamental of these is to exercise the right to vote.

Think of all those people living in countries which are dictatorships or one-party sates, or run by bullies who buy votes or technologically manipulate voting. The absence of democracy crushes the soul of a nation and its peoples. Mindful of the millions in our world whose basic human rights are denied, we urge all citizens to ‘step out and vote’.

Q: How did the Bishops plan the statement’s structure and approach?

Our election statements have tended to start with Church teaching, the principles of Catholic social teaching – a top-down approach. This year our framework is one of conversation or korero. It’s grassroots, more like a family or flatmates’ discussion.

No-one goes to a course on how to vote. We grow in sensibility organically, through dialogues and simple chats. Our hope is that this approach will spark off conversations.

The ten focus points are in fact the fruit of a korero we had as Bishops around the table of our last meeting. Our distribution of the statement in attractive format through Pukamata and social media are examples of contemporary shepherding.

Q: A number of politicians are Catholics. Is there an expectation on these politicians to lead or act according to Church teachings?

Chris Patten, the last British Governor of Hong Kong and a Catholic, recently said: ‘never did I keep quiet about my faith. Part of my identity is being a practising Catholic’. Alistair Campbell, Prime Minister Tony Blair’s spokesman infamously said of Blair, ‘a Catholic: he doesn’t do God’! Two very different positions. I think in New Zealand we can only ask of our politicians what we are comfortable with ourselves as Catholics. In other words, do we in our own workplaces lead or act according to our faith? Public witness isn’t easy. But it is asked of us as people of faith.

Q: A good question for readers then is, what do people at my workplace know about my faith? How is it reflected in my meetings, and talk and workplace atmosphere etc?

I generally start my work day in Palmerston North’s magnificent Cathedral. Daily there are people in there from our migrant communities – often in tears – imploring God’s intervention in their battles with Immigration NZ and its ever changing goalposts. I can talk about the complexity of migration from the head – and that is necessary to temper emotionalism – but when I engage the heart, when I sit alongside and listen to those who are troubled and feeling vulnerable, I soon see that the reduction of people to pawns in our list of labour needs for our economy is a cold and calculating framework for engagement. One kind of society presents hurdles, another kind presents steps.

So for me too I’m finding the build-up to the elections a time of formation.

We Bishops encourage you all to read our statement. Grow in your desire to reflect and discuss. Then vote for our nation.