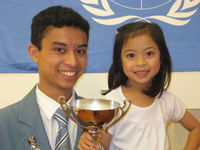 Roneil, in year 13 and the school’s head of culture, which includes public speaking and kapa haka, attended the conference because he won the UN Youth Association of New Zealand’s annual national high school speech awards.
Roneil, who’s in the youth group at Ss Peter and Paul, Lower Hutt, won the Wellington region awards then the national awards, speaking on this year’s theme, ‘The human race before the arms race’.

In his seven-minute speech, Roneil asked the UN to implement more programmes to engage youth, as they hold the power of possibility and steer the future of humanity.
He said initiatives such as Duke of Edinburgh awards and World Youth Day are inspiring examples of how youth are empowered to become better.

Next year Roneil plans to study at Victoria University towards a commerce and arts degree, including Chinese studies.