Meri Hohepa No Aotearoa, he taonga of te hunga tapu I raangahia 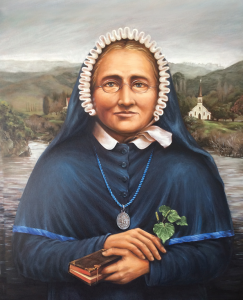 Suzanne Aubert – Cause for sainthood.

The New Zealand Catholic Bishops Conference have announced a day of celebration of Suzanne Aubert at Sunday Masses on 2 October – coinciding with the 90th anniversary of Aubert’s death in Aotearoa New Zealand, 1 October 1926.

Parishes are invited to include a special Prayer of the Faithful for the successful outcome of the Cause for Suzanne Aubert’s sainthood. The Cause for the Beatification and Canonisation of Suzanne Aubert has reached the stage where it is hoped that Pope Francis will declare her ‘Venerable’ in the not too distant future, the bishops said.

Cardinal John Dew says, ‘profiling the spirituality, good works and contribution to church and society of Suzanne on this special day enables many more people to learn of this remarkable woman and why the bishops believe she will eventually be declared New Zealand’s first saint.’

Suzanne Aubert arrived in Aotearoa New Zealand in 1860 from France and dedicated 66 years of her life showing the compassionate face of Christ to some of the most neglected in society.

As a young woman, she chose to leave her native country and spend three months travelling to New Zealand on a whaling boat, so she could answer the call of Christ – the call to serve the sick, the orphaned, the elderly and those who society seemed to not notice, and devoting her life to others.

Her work took her first to Auckland then to Hawke’s Bay, to the Whanganui River and then to Wellington. Her response to what she encountered was to educate the Māori children. She was actively engaged with the local Māori population and spoke Māori well. She cared for the children and the sick, by combining Māori medicine and Pākehā science, and wrote books in Māori, English and French.

Aubert established orphanages for abandoned children and provided care for the handicapped, the sick and the dying. In 1892 she founded the religious order, the Daughters of Our Lady of Compassion, whose work carries on today. She started two hospitals in Wellington; the first, St Joseph’s Home for the Incurables in 1900, and Our Lady’s Home of Compassion in 1907. She established New Zealand’s first soup kitchen, which still serves some 40,000 meals a year in Wellington.

When she died, Suzanne was given the largest funeral ever in New Zealand for a woman. The whole of Wellington stopped to pay their respects and publicly acknowledge what this remarkable woman had achieved.

Cardinal John said,‘The Church has already officially called Suzanne Aubert a Servant of God and the next step on her journey to sainthood is being declared Venerable.’

‘Today Suzanne continues to inspire us by her writings and example,’ said Bishop Charles Drennan. ‘Many of the social challenges and injustices Suzanne faced are still with us now. This anniversary prompts us therefore to ponder deeply our response to the social, health and educational needs of Māori, Pākehā and indeed all those who today call New Zealand home.’

Click here to read more stories in the latest edition of WelCom, October 2016.