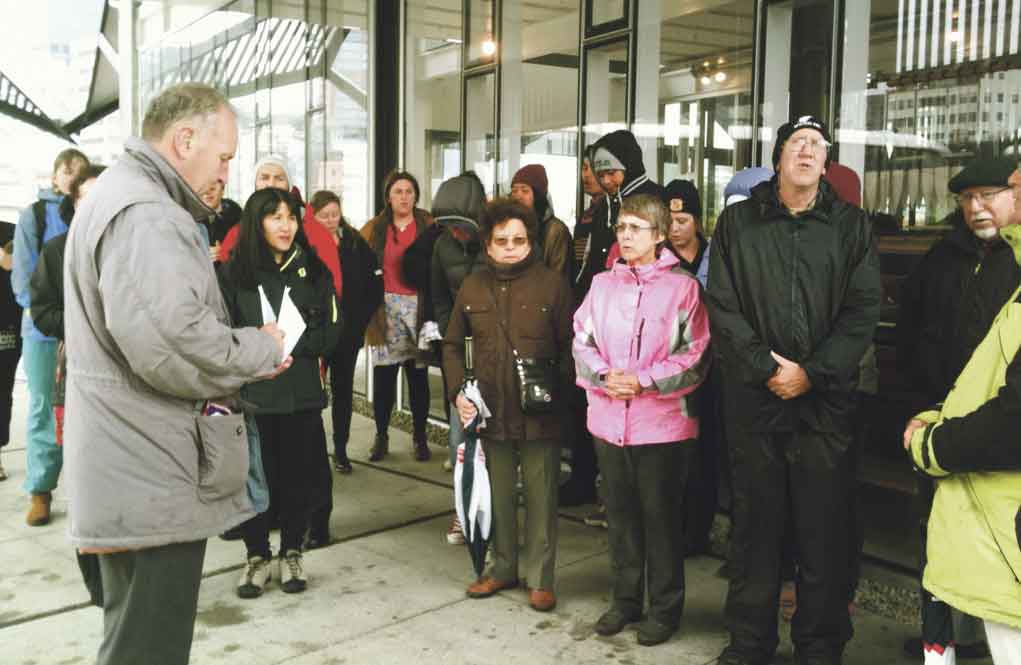 A group of hardy souls braved Wellington’s stormy weather on Ash Wednesday for a service opposite the Stock Exchange to focus on the juxtaposition of short-term profits and social values.

Before distributing ashes, Mgr Gerard Burns assured listeners that a stock exchange was not intrinsically evil.

‘It can be a way of sharing resources or bringing new businesses into being. But in our contemporary world, stock exchanges exist in a world of distorted economic and social values. The importance of short-term profits comes to override other significant realities such as the stability of local communities, jobs, the care of creation.

Of course, distorted values and shonky trade practices are not new. We have heard from the prophet Amos:

‘Listen to this you who trample on the needy and try to suppress the poor people of the country, you who say ‘When will the new moon be over so we can market our wheat? Then by lowering the bushel, raising the shekel, by swindling and tampering with the scales, we can buy up the poor for money and the needy for a pair of sandals and get a price even for the sweepings of the wheat’ (Amos 8:4-7).

Pope Francis refers to these distorted values and practices in his recent apostolic exhortation Evangelii Gaudium.

Why is it not news when an elderly, homeless person dies of exposure, but it is news when the stock market drops by two points?

Although there is great individual generosity among the citizens of Wellington, we are reminded that, not far from this place, an elderly homeless man died in a bus stop a few years ago. We, too, are challenged by the pope’s words which are an extension of Jesus’ response to the rich young man who asked: And who is my neighbour? (Luke 10:25-37)

Pope Francis also spoke of an economy of exclusion and inequality that kills. In that economy based on the survival of the fittest, ‘the powerful feed upon the powerless, masses of people find themselves excluded and marginalised, without work, without possibilities, without any means of escape’ (EG, n.45).

The pope also speaks about the way the ‘trickle down’ theories of economic growth express a ‘naïve trust in the goodness of those wielding economic power and in the sacralised workings of the prevailing economic system’. This in turn can lead to a globalisation of indifference. People can end up being incapable of feeling compassion at the outcry of the poor, weeping for other people’s pain and feeling a need to help them, as though this were someone else’s responsibility and not our own’ (EG, n.46).

The Pope’s critique of the current financial system and ‘ideologies that defend the absolute autonomy of the marketplace and financial speculation” continues over various paragraphs. We are all locked into the current economic system in some way. It can confine us, blind us, mislead us and destroy us and our planet.

So we gather here to reflect on how we can live our Lent truly. Lent is a time of prayer, of fasting from those things that keep us from God and a dedicated following of Christ, of solidarity with the poor (almsgiving).

The prophet Isaiah from the 8th century BC reminds us of some of the ways in which we are called as a society to structure our lives around the needs of those experiencing significant hardship. Speaking the words of God he criticises the economic practices of Israel’s wealthy saying:

‘Is this not the kind of fast that pleases me: to break unjust fetters, to undo the thongs of the yoke, to let the oppressed go free…to share your bread with the hungry and shelter the homeless poor….?’ (Isaiah 58: 6-10).