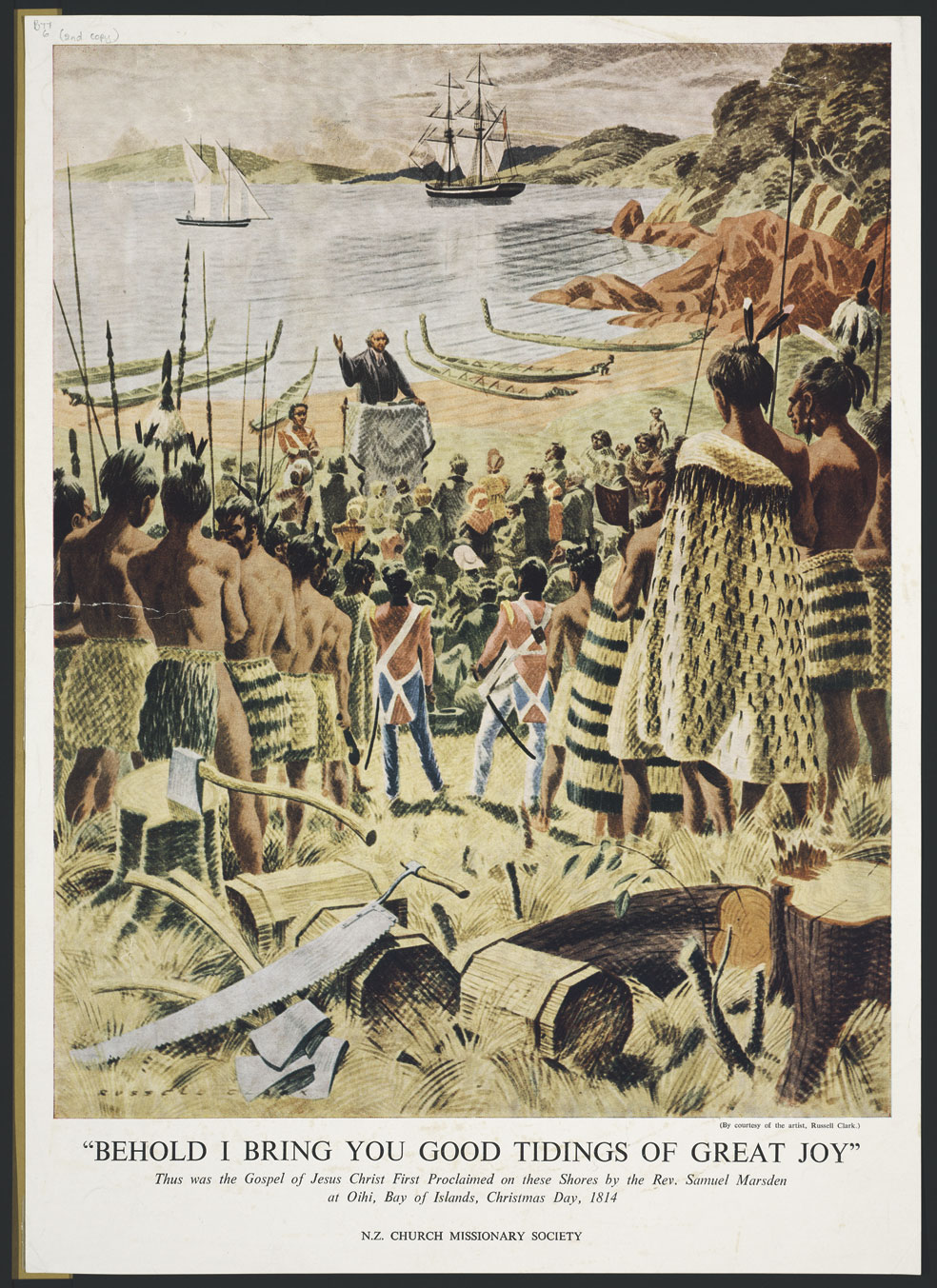 History
April 2014
Catherine Jones smsm
This Christmas marks the 200th anniversary of the first recorded preaching of the gospel in Aotearoa New Zealand. On Christmas Day 1814 Anglican missionary Samuel Marsden preached at Oihi Beach in the Bay of Islands on the Christmas theme of joy: ‘Listen, I bring you news …’
Ruahara of Rangihoua Pa extended the invitation for this occasion. Today the now deserted pa whose terraces remain clearly marked, still overlooks Oihi beach, about 25 kilometres from Waitangi.
Attending a Christian Leaders’ Congress which coincided with Waitangi Day in February, I joined a small group on a journey to Oihi beach, the perfect setting for reflection on what this ‘good news’ had meant for those who first heard it on this spot nearly 200 years ago and what it can mean for us today.
Then as now, the ‘good news’ is tinged with ambiguity – strained bicultural relations – promises not fulfilled – yet with hope that we will grow into becoming a people of gospel joy, ‘a joy to be shared by all the people’. I wondered if someone had tipped off Pope Francis about the bicentenary when he was writing Evangelii Gaudium.
There are many events being planned to mark the bicentenary this year. The New Zealand Church Missionary Society (NZCMS) has an excellent website with links to power point slides, articles and videos about the year. There are also several pilgrimage sites relating to some of these early missionaries and their achievements.
In Wellington, at Te Aro Park, on the intersection of Manners Street and Cuba Mall, is a plinth with three plaques, marking the first Christian service conducted in Te Aro Pa on 9 June 1839. The memorial acknowledges Minarapa Rangihatuake of Taranaki as the first Wesleyan minister at Te Aro Pa. He introduced the Methodist ministers, John Bumby and John Hobbs. The gospel text on the plaque reads: ‘Whosoever shall drink of the water that I give shall never thirst’ (John 4:14).
Early missionaries in what is now the Palmerston North Diocese include a witness to the signing of the Treaty of Waitangi, William Colenso, who is well known for his translating and printing of the Bible in Maori. A moss-covered monument at the Colenso Spur up the Makororo stream marks the first of Colenso’s six crossings of the Ruahine Ranges in February 1845. In the middle of the ranges is Lake Colenso.
Hawke’s Bay also remembers the pioneering work of Samuel Williams in the field of Maori education and the establishment of Te Aute College. In the Kapiti-Manawatu region, the work of Octavius Hadfield is remembered. He is buried alongside his wife, Catherine, in St John’s churchyard, north of Marton.
The invitation of the bicentenary year, along with other Christians, is ‘to drink of the water’ Jesus offers that we may truly be ‘a message of great joy for all the people’.