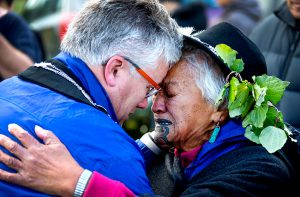 We are all called to conversion and it can come at any moment of our lives – especially if we are open to it. Recently, our New Plymouth Mayor Andrew Judd had just such an experience, which has had a significant impact, both on his life and the life of our region.

Andrew has, over the past few years, become more aware of the injustices done to our tangata whenua at the time of the Taranaki Land Wars. More importantly, he has been listening to those who continue to be affected and he decided to give Māori a greater voice at council level.

In a brave attempt to address this issue, he sought to bring about increased Māori representation but was met with opposition, both from within his council and the wider community. As a response to this opposition, Mayor Andrew led a peace walk from the New Plymouth District Council building to Parihaka Marae, Taranaki’s spiritual home of non-violent, peaceful resistance to injustice. Over three days, 15 to 17 June, hundreds of people from a variety of different backgrounds walked the 44km journey, ending with a profoundly moving powhiri at Parihaka.

On day one, it became apparent that people from all over the country came to show their support for this local initiative but also for improved race relations for everyone in Aotearoa. Parishioners from our newly established Catholic Parish of New Plymouth including students from Sacred Heart Girls’ College took part and we came away uplifted and inspired by the experience.

People came for a variety of reasons but the one unifying factor was a strong desire for a more just and unified country, free from all divisions. The hikoi (walk) included stopping at small community halls along the way, to enter into structured conversations about what we all need to do, to bring about a more peaceful and just community. These formal discussions were supplemented by many informal conversations on the road making for a rich sharing of stories and ideas.

In his final address, Andrew took off his Mayoral chains and held them up, stating that they once symbolised power and privilege which, in the past, have kept some people bound. His hope is that whoever wears these chains in the future will continue to keep the conversation going and work for reconciliation, unity and peace.

Standing on that sacred ground it was very apparent the Parihaka people were equally moved by the whole experience and took great comfort and hope from seeing Pakeha stand with them in solidarity. As I see it, the challenge now is for an openness to conversion, by the majority who haven’t yet seen the need to change.