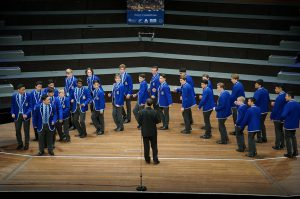 Congratulations to St Patrick’s College Wellington’s choral group ‘Con Anima’ who gained a bronze award at the 2018 national choral singing competition Finale, The Big Sing. The Finale was held at the Michael Fowler Centre in Wellington on Saturday night, 1 September.

The Big Sing Finale is a celebration of choral singing from the best young choirs in the country.

The New Zealand Choral Federation organises the annual event from regional festivals, through to the Finale where the young finalists performed two recitals over three days.

The Finale 24 choirs were selected from a total pool of 257 choirs involving 9,500 nationwide, after weeks of regional events around the country. Seven different regions were represented – from Auckland to Southland. Each choir presented two recitals – a 10-minute performance of three items, and an 8-minute performance of two items. The recitals were adjudicated by a panel of three expert judges – Karen Grylls (Auckland), David Childs (USA, born in NZ) and Peter Walls (Wellington).

All 24 choirs in the Finale received a bronze, silver or gold award, which were announced at the final event of the festival – a Gala Concert where each choir sang one song from their repertoire. There were also special prizes for the best performance of NZ music, art music, and music with a Māori text.

The Big Sing Grand Finale ended with a massed choir of all the singers. The event was live streamed, and each year thousands of viewers from around the globe tune in to what has been described as one of the best secondary school choral festivals in the world.