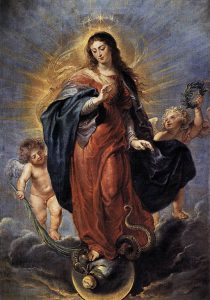 Patron of the Archdiocese of Wellington

The feast of the Immaculate Conception is also the day Wellingtonians traditionally pray to Mary to protect them from earthquakes.
In 1855 Wellington experienced a severe earthquake that rocked the southern part of the North Island. At magnitude 8.2 it was the most powerful ever recorded in New Zealand.
The earthquake was caused by movement along a fault in Palliser Bay and lasted nearly a minute. Wellington was worst affected and up to nine people died. It altered the landscape of the region and affected its subsequent urban development, although many new wooden buildings survived.
Bishop Viard (who had arrived in Wellington in 1850 as Vicar Apostolic of the Southern diocese, headquartered in Wellington, and was appointed Bishop in 1860) was overseas at the time. He decided on his return to consecrate the Archdiocese of Wellington to the patronage of Mary under her title of the Immaculate Conception. Every year since then, on 8 December Wellington Catholics pray to Mary to protect the city from further earthquakes.
According to ‘local legend’, during World War II Archbishop O’Shea forgot to say the prayer and in 1942 Wellington experienced another severe earthquake.

Act of Consecration of the Archdiocese to Mary:

Prayer for 8 December
Mary, Mother of God, Christian people have always called on you in their hour of need and you have never failed them. We, the Church of Wellington, on this feast of your Immaculate Conception express our love for you and ask your help for our needs and the needs of the whole world. [*Holy Mary, Mother of God . . .                   Response: . . . pray for us.]
We consecrate to you the Archdiocese of Wellington and its people. May we always admire and strive to live the virtues of your life. Watch over and protect the Church and be with Pope Benedict and our Bishops as they shepherd Christ’s pilgrim church. [*… Response]
We pray for the peoples of the world, that they may learn to know your Son and banish all that is contrary to the Gospel. Inspire people to work for basic human needs and for understanding and mutual trust between nations. May your Son raise up men and women who will spend themselves in alleviating the needs of people in lands where there is suffering, hunger and disease. Have compassion on parents unable to provide for their families, on husbands and wives who are separated, and on children who are victims of ignorance or violence. [*… Response]
Mother of Mercy, through your intercession may the Holy Spirit change the hearts of all and turn them towards truth, justice and charity. Teach them to see that peace will be possible only when all obey God’s Law, respecting the rights and dignity of their neighbour. [*… Response]
We ask you especially to protect the parents and families of our land, that they may learn the meaning of love and justice. Strengthen us so that we may withstand the temptations we meet and reach our potential as unique creations of God. [*… Response]
God established the earth on firm foundations. Ask God now to remove from our land the danger of earthquakes and the terror and destruction they bring. [*… Response]
Mother of God, through your intercession may all nations turn from sin. Lead the nations to the loving and merciful heart of your Son, where alone they will find truth, life and peace forever. Amen.