The Race Relations Commission and the Bahá’í Faith have been running the contest for the past five years and Sacred Heart has won it twice. The competition commemorates a Bahá’í member, Hedi Moani, who worked with homeless people in Wellington and was killed in the street while on the job. It was his wish to set up a contest which drew attention to the sorts of incidents that  engender racial hatred and the possibility that people of all cultures can live in harmony. 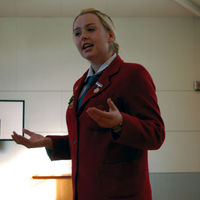 Bridget was born in 1990, the year New Zealand marked 150 years since the signing of the Treaty of Waitangi. Her parents Gerald and Geraldine Scanlan felt that this might mark a turning point in the country’s history when M%u0101ori and P%u0101keh%u0101 could learn to live together peacefully.

They were so impressed with M%u0101ori kuia Dame Whina Cooper who led a hikoi to Parliament in support of M%u0101ori land rights that they wrote to her asking if they could name their daughter after her.

Bridget told the story of Whina Cooper in her speech on the ‘oneness of humanity’ revealing her own second name, Whina, only at the end. She also drew on her experience as an exchange student in Germany and looked at how the world responds to tragedy and uses technology to bring people together.

The competition took place during a conference on cultural diversity and Bridget said after a day of discussing and promoting racial harmony with ‘heaps of other cultures you were really passionate about the subject and really believed what you were talking about’.

Theresa Lealofi spoke about being Samoan and head girl of a school in another dominant culture. She talked of how the school worked as a family regardless of race or background. She had learnt te reo M%u0101ori and realised how similar the language and cultures in the Pacific are.

She also drew on the influence of God in her life and how this and her family’s values had motivated her.

The girls’ teacher, Marek Pipi, said they were very close in the regional section of the competition and both were clearly appreciated by their peers.

‘It is easy to deliver a speech to please the judges but when your peers tell you that your speech made them think, and that they learnt something, that’s a great achievement.’