Fr Philip Gibbs SVD has been a missionary for almost 40 years, mainly in the Highlands of Papua New Guinea. He has pondered the issue of inculturation and how different cultures can learn from each other. 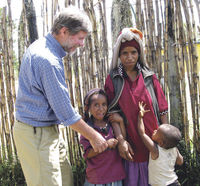 ‘When I first went there in 1973 I found it really hard because, though I listened, I couldn’t understand what people were really saying because of the language barrier. There was always the need for a translator.

So I asked to live with a local family in an isolated community for six months. I ate with them, slept with them, spoke only their language. I didn’t hear a Pidgin or English speaker for all of that time. While I was with them, their baby died, and the man’s brother died in a logging accident so I grieved with them on two occasions. The experience, though hard, was a hugely helpful time in terms of starting to understand culture and people’s way of life.’

Fr Philip finds he learns much from people simply by being with them as they deal with various issues in their lives.
This story as told to him by an elderly Enga woman who first encountered the ‘modern’ world when she was a young adult shows the value in thinking of Jesus as one of us, wherever we are.

‘My name is Lena Jacob and I am from Tsaka and I want to tell about the time in my life when I really felt that Jesus is the Lord of Enga (culture).
‘I was baptised in the Catholic Church when I was very small, and at that time I wore white clothes and I cut my hair. When I received First Communion I was really happy and I thought: This Jesus is a white man, and I will see a white man, and also the way I praised and worshipped Jesus was according to the ways of whites. I myself thought that Enga culture was sinful and that I should abandon it and follow the ways of white people.
‘So, I thought that I would see Jesus in a dream as a white man and Holy Mary as a white woman. So it was like that and in a dream when I saw my brother I would think it was my brother in the dream.

‘That is why I say, when Jesus died and rose, he entered into the culture of everyone on earth. If Jesus did not die and rise, then I believe that Jesus is just a man from Israel, and I would see a white man. If Jesus had died for whites then he would not come here, but he died and rose again and he wants to redeem me from my sin.

‘Often in my life I think that I would really like to see Jesus and that I could really feel him with my body and spirit and when I pray, I pray that he would appear to me somewhere so that I can see him.

‘One time I was praying and a thought came to me: “This body and blood of mine that you see and receive, it is truly my body and blood.” And I prayed to God: “When I go to receive him you must show me if I am really receiving Jesus in my life.”
‘Next day, early in the morning I went to morning Mass and while there I was praying that he would show me. When Father gave me communion it tasted different from anything I had ever tasted. Immediately I felt that this was the Jesus people talk about, this was the Jesus they follow.

‘So I remained and one time the youth were wearing bilas during the worship service. At that time I thought decorations like that were sinful and it was something that I had rejected, and the youth were crazy. I reflected on this and then I thought how Jesus had died and risen and has entered into Enga culture.

‘So if I am an Enga woman, then to show other men and women that Jesus is the Good Lord of Enga then I should decorate myself as a real Engan. So from this time on I started to wear bilas and with bilas I worship God.
‘When I wear bilas I think that the Jesus I believe in is an Enga man and also that the Jesus that I worship and follow is not a man from some foreign place. Now I have a strong faith in Jesus the one Good Lord of Enga.’