Members of religious orders living in the community draw little attention today but in the early 1970s this practice was a novelty and sometimes frowned on in the Church.

A trailblazer in this practice, Jacq Dromgool, has spoken for the first time of her experiences as part of a group of four Sisters of the Sacred Heart who moved out of their convent in Island Bay to live in the old Newtown fire station.

The initiative was mooted by David Robinson, in charge of the Newtown Community Centre at the time, but coincided with a reassessment of vocation as a call to experience and share Christ’s presence more fully in the community.

`The idea of the fire station was for us to be the presence of Christ in a community of people. It was not so much to do things for them – it was to go and be there and be that presence.’

Jacq says one reason they shunned publicity, although they were the first group in New Zealand to move into the community, was because they felt they received far more than they gave and they did not believe a newspaper report would convey the idea of the reciprocity.

`We didn’t know at the time but we knew pretty soon afterwards that we received twice as much from the people that we were with as they ever received from us. It was the most powerful expression of Christ being there with us and people ministering to us.’ 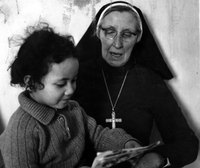 The four women, Sisters Winifrid Mahar, Elaine Fleming, Teresa Brophy and Jacq Thurston, lived in the flats which were built for firemen and their families within the station building. The Inner City Ministry and Catholic Social Services introduced people who needed to live in a supportive environment.

A solo mother with eight children lived in the first flat.

‘She was God’s gift to those children. And they subsequently grew up as good and capable adults. Some of the children belonged to her brother who was unwell. I am proud to be godmother to one of the girls.’

In the early 1970s before the domestic purposes benefit gave solo mothers a degree of financial independence, such women were forced to work outside the home so Sr Winifrid looked after the youngest child while the mother went to work.

The second flat housed the family of a former Marist brother.

‘He subsequently became a social worker and went back to Samoa then came back to work in Newtown prior to his death not many years ago.’

A German man lived in the flat next to that of the Sisters with his M%u0101ori wife and four children.

‘They lost their house because when he gave her the mortgage money every week she didn’t get around to paying it into the bank and he was a very hard-working guy.

‘She was up and down psychiatrically and she’d come banging into our place at one o’clock in the morning in a state about this, that or the other so she needed a lot of support. We became friends and over the years we touched base especially after her grandsons went to a Catholic school.’

In the far flat a woman from England lived with two of her four children.

‘There was a man who spent a lot of time visiting her and he was a chef with the air force at Shelly Bay. He was gay, a wonderful and colourful character and totally supportive of her and the children.’

As well as ministering to this small community, the Sisters continued their work. Elaine taught at Erskine College, which was run by the Order, and worked in the homework centre at the Newtown Community Centre.

Teresa Brophy also taught at Erskine and worked with secondary students and with a slightly older youth group.

Sr Winifrid who had been a school principal and was already in her 70s ‘surprisingly took to this complete change like a duck to water – she was absolutely magnificent’.

She and Jacq, who was at university at that time, worked at the home.

‘But the home base was extremely busy – we had a lot of people dropping in.’

At one stage the Sisters took in a young couple with a small baby who had nowhere to live. When the husband began abusing his wife, she went back to her family in Hawke’s Bay leaving the four-month-old baby in their care. On Plunket advice, the Sisters decided that Jacq should be the baby’s main caregiver.

‘I hadn’t had any experience with babies but I rose to the occasion, I have to say. I loved it. I was responsible for giving her her first solids. When I went to university, Sr Winifrid [took care of her] and we had an alcoholic lady living with us at this time – totally gorgeous – and she loved being with us. So she would wash the nappies, do all the ironing and endeared herself to all. I think all her children had spent their lives in an orphanage because of her alcoholism – a sad case.’

The baby stayed with the Sisters for around three months before she went to live with an aunt, and was then reunited with her mother.

As well as those who lived for varying periods with the Sisters, there were a number of regular visitors.

‘Even the local Black Power came around and Sr Winifrid was privileged to wear one of their jackets with their famous patch. Who you were was not important. Everyone came as they were and shared the love from others in the community. Everyone helped.

‘At one stage we had two ex-prisoners living in the laundry upstairs which opened onto a deck. St Vincent de Paul knew us and supplied everything. However, I do remember that the council found out and weren’t impressed.

‘People never came empty-handed. Like the mother from one of the flats who had all those children – she would bring us bacon because she worked in Goulds. Roy was another one who lived with his elderly mother and he used to regularly bring a sack of potatoes.

‘You know there was something about the community there that was quite different from any other I’ve ever known because you didn’t belong to that community if you didn’t accept everybody there and respect them.’

Jacq says she has carried this idea through her working life as a school principal.

`They were giving us things that we’d never had before in terms of love, trust and experiences and the risen Christ was everywhere.’

Jacq says the Sisters ‘had no preconceptions when we went there’. The plan evolved on the basis that every person was valued for the contribution they made and that somehow Christ would ‘pitch his tent among us’.

‘You don’t worry about little quirks and weaknesses that people have because everybody’s got them. And I think we pass judgement on people much too quickly if they don’t measure up to some sort of ideal we have.’

Debate into the wee hours

There was a heady mix of intellectual dialogue with visitors who included a number of priests and religious. It was a time of searching and fierce theological and philosophical debate – well into the early hours of the morning.

‘We were frowned upon for the Masses we had there – not directly. We heard back from people who disapproved of us.’

The Sisters became known as ‘those fire station nuns’ because the Masses were a bit different. ‘We had minimal vestments, a glass chalice and shared sermons in a relaxed setting. It seemed more in touch with the reality that was ours and those around us.’

The Sisters moved their community to a house in Daniell Street next to the presbytery two years later but Jacq believes this changed the dynamics so that the community was never again quite so free to be totally available and immersed in such a diverse group.

‘God asks not about our ability or inability but about our availability. This was how I saw those two years. The experience was an indescribable blessing for the rest of my life.’