Counting is expected to be underway in Timor Leste this weekend as the country chooses the government in the second parliament since the tiny Pacific nation gained independence from Indonesia in 1999.

Timor’s independence came with a high price—massive bloodshed at the hands of Indonesian militia reluctant to hand over control of the country in the wake of a referendum overwhelmingly in favour of independence.

The country’s history has been fraught with instability wrought by unrest as high unemployment, particularly among the youth, fuelled violence and looting last year over the government’s sacking of a wing of the military. There was also increasing dissatisfaction with Mari Alkatiri’s leadership and suspected corruption in his Fretilin party.

Now Fretilin is struggling to maintain its hold on the power with the widespread perception that the party favours its friends in the east while neglecting those in the west of the country. 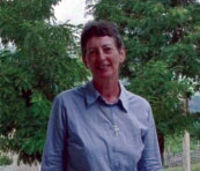 One observer, Sr Helen Nolen, a member of the Parish Education Team who teaches English in the junior and senior high schools and works with teacherson teaching methodologies, says the people don’t think Fretilin has delivered.

‘Many people would say they were better off under Indonesian rule. There were roads, and schools and food with opportunities for selling goods in the nearby markets.

‘Now the roads are so bad and cars are not easy to obtain, people generally walk everywhere though teachers and nurses tend to ride motorbikes.’

Sr Helen lives in the community of Fohorem near Suai, Cova Lima, where New Zealand soldiers were based. Although her village is only 29 kilometres from Suai, the journey takes around two hours over ‘dreadful’ roads.

The education system is still endowed with much of the Indonesian methodology of rote learning and it is difficult to introduce any creativity into the learning process.

Helen, who first went to East Timor with Australian Volunteers International for two years, has stayed on and broadened her teaching programme to include preparation for preschool education.

She says the junior high school is ‘miserable’ with few items of furniture or teaching resources. Classes are often as large as 55 children for one teacher and progress is grindingly slow. The Catholic primary school has recently renovated one of its blocks with money from the Conrad Hilton Foundation

One classroom in the new government primary school is being used for the first class of the newly established senior high school.  The  government has recently renovated one building of the hospital and administration block.

Cova Lima suffered enormous atrocities in the post-referendum violence of September 1999 in the Fohorem district—nearly all buildings and infrastructure were destroyed.

But, nearly eight years later the area is finally about to get a permanent water supply via a Rotary project in conjunction with Mercy Works Incorporated, the development arm of Helen’s Order in Australia, the Sisters of Mercy.

Another organisation, the Friends of Suai, based at the City of Port Phillip in Melbourne, has had a solar-powered plant installed in the medical clinic

Meanwhile, the election result will be eagerly awaited. Fretilin has used strong-arm tactics to exert its influence, forcing those in positions of authority who are not card-carrying members of the party to relinquish their jobs to party faithful.

The ruling party has also been persuasive, giving out t-shirts carrying political messages—which Helen says are pointless as many can’t read—and allegations of buying votes with donations of rice.

The former, highly popular, president, Xanana Gusmao, has gained a great deal of support for his newly formed party, CNRT, through the people’s disillusionment with Fretilin, which swept to power in the 2002 elections as the party which led the independence movement. With some of the smaller political parties forming coalitions, there is a sense that the mandate of Fretilin will be greatly reduced.

International scrutineers will be keeping an eye on the vote-counting at district level- a change from the Presidential vote which was counted at local level with boxes then transported to district level.  There is some skepticism that  the system of vote counting at district level is open to corruption. Voting will be completed by 2 July when all votes will be sent for national tabulation. A provisional result should be available by 5 July after which there will be appeals and the final result should be known by 10 July. 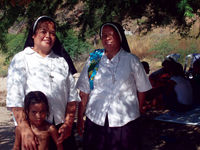 Meanwhile Christian World Service community liaison officer, Mary Cavanagh, has just returned from visiting a project in Dili saying thousands of refugees are still living in camps lacking the confidence or wherewithal to return to their homes.

CWS supports a Dominican Convent whose Sisters have taken in over 2,000 refugees.

The Sisters have set up a temporary school 100 kilometres inland from Dili so that the primary school children can continue their education with one of the Sisters.

Older trainees have been able to help care for the refugees who took shelter in the compound almost a year ago when the Timor capital exploded in riots leading to widespread and violent attacks on homes. 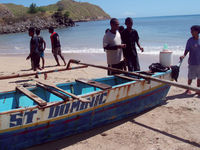 Mary Cavanagh reports that the refugees have become part of the convent community, taking their turn on cooking and cleaning rosters, children’s activities, handcraft sessions, and enjoying regular visits from doctors.

The Sisters encouraged the refugees to return to their homes in the safety of daylight to tend gardens and animals. Those whose houses have been burned down have been urged to rebuild and repair with the available financial help.

The convent has also had new water tanks installed, built and stocked a small pigsty and grown vegetables to cope with the influx of refugees.

Pictures show (top) Sr Helen Nolen at her home in Fohorem near Suai and the border with West Timor; Sisters Nini and Malu who run the orphanage at Moto Claran, celebrating Independence Day, 20 May 2007; and (bottom) members of the Dominican Youth Groups on Independence Day. They use the boat to catch fish for the orphanage and to make money for their group.