Irish Columban Fr Sean McDonagh’s call for a Synod for Creation in light of the need to almost halve carbon emissions worldwide in the next decade set the tone for a recent school principals’ conference in Hobart, Tasmania. This was an inspirational Conference of Catholic Secondary Principals of Australia (CASPA) where cosmology and ecology were explored in depth.

Fr McDonagh believes that if Pope Benedict were to bring together a Synod for Creation, it would not only be a diversion from the negative publicity of the current scandal of sexual abuse in the church, but a powerful statement when we know that current gas emissions must be cut by 40 percent by 2020 to avert disaster. The church might succeed where Copenhagen failed.

The Easter prayer to the Holy Spirit ‘to renew the face of the earth’ gives a cosmic dimension to the Resurrection which young people easily relate to.

Since the 1960s the consumption of western or ‘minority’ nations has increased six times. People have been led to believe that consumerism is the sure route to happiness. Fr McDonagh said Catholic schools needed to be counter-cultural to this. To keep consuming at this rate would need three or four planets and we do not have this number of Earths.

He noted the irony in the world waiting for the ‘green’ shoots of economic recovery which would then set us back on the consumer track and reverse ecological renewal.

Theology has concentrated on individual and personal issues and we have neglected cosmology and the planet. St Columban said, ‘If you want to know God, learn about creation’.

Much of the conference discussion centred on how Catholic schools can focus on sustainability and on telling students our own story about cosmology and the power of the Eucharist.

Pope John Paul II in Ecclesia de Eucharistia, spoke of the cosmic character of the Mass ‘Because even when it is celebrated on the humble altar of a country church, the Eucharist is always in some way celebrated on the altar of the world. It unites heaven and earth. It embraces and permeates all creation.’ 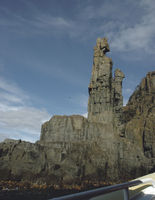 We should be helping students to see the wonder of this and to know that God holds ‘all things in unity’ (Col 1: 15-17). It is through the salt of our preservative force that planet Earth can breathe again and have light.

The post-Easter conference gave a new meaning to the Resurrection for the whole of creation also struggles to be free from decay.

The conference used a translation of Romans 8: 19 – 21 from Brendan Byrne SJ which seems to sum up the whole of what ecology and sustainability should be about.

‘For creation awaits with eager longing the revelation of the sons and daughters of God. For creation was subjected to futility in hope that creation itself would be set free from its slavery to decay in order to share the freedom associated with the glory of the children of God.’ (Commentary on Romans (Saera Pagina).

Sacred Heart College’s principles give priority to stewardship of the earth and students study sustainability in the curriculum.
See www.sacredheartcollege.school.nz for the full conference report.

above right: The Jurassic dolerite of Tasmania’s eastern coast.