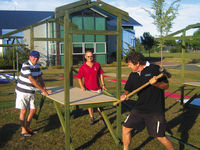 A lively Twilight Wine and Food Fest in the modern grounds of Garin College to raise funds to travel to Sydney for World Youth Day in July was deemed a roaring success.

Nelson and Tasman World Youth Day pilgrims and their families put in a huge effort on February 3 which attracted a crowd of around 2000 and raised some $13000.

The crowd flocked in to enjoy the four-piece jazz band called ‘Four Friends’. This provided the perfect backdrop for the popular Victorian Devonshire Teas site. Under the shade-cloth, round tables were draped with rosebud tablecloths, miniature floral bouquets, china cups, generous teapots and creamed scones for delighted customers to enjoy.

Pommeroy’s coffee machines worked furiously to keep up with large orders for coffee and specialty cake.

Under a pergola, two talented hair stylists from a local hair salon transformed many hairstyles for a great price. This proved very popular.

Outstanding music was a big factor in the night’s overwhelming success. Six musical acts took their turn to keep the music going non-stop.

As people wined and dined under the fine February sky, Donald MacGregor, a solo flutist, treated the crowd to melodious music. Many people were delighted with what they saw and with the fun, community atmosphere.

Phil Madsen, a solo performer from Auckland, flew down with his keyboarder, Brent Holt, especially for the show. He easily enticed the keen crowd up to dance and sing.

“Flashback” followed on, also winning over the audience happy to keep dancing. So successful was the non-stop music, that Perrin Madsen of Nelson joined his brother Phil on the stage for an extra half hour’s play which delighted everyone!

Thanks to the outstanding generosity of families, pilgrims, parishes, the wider Nelson/Tasman community and numerous business sponsors, the money raised will help 30 young people and eight World Youth Day leaders to attend World Youth Day in July this year.