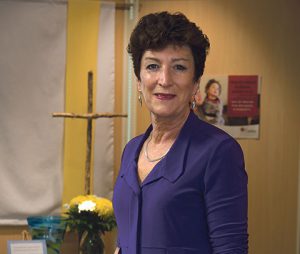 After five stimulating years as Religious Education Adviser for primary schools in the Wellington Archdiocese, Maureen Phillips is returning ‘home’ to Nelson as principal for St Paul’s Catholic School in Richmond. She says she has been greatly looking forward to taking up her new role and working in her ‘home town’ again and being part of the Richmond parish.

Maureen says it has been a challenging time to be in the Catholic education system considering at a national level the learning needs of young people today. ‘The particular focus has been on what constitutes authentic learning within Religious Education and learning that will have a lifelong impact on these young citizens of the future.

‘Alongside the challenges, it has been a privilege to work with dedicated teachers, directors of religious studies and principals who embrace and seek new ways of teaching Religious Education within contexts of students’ world view. Ultimately the blessing of the role has been experiencing the rich diversity within our diocesan schools,’ she said.

‘While I have had a sense of leaving behind a wonderful group of professionals whose collaboration and collegiality I have truly enjoyed, there is also a sense of returning home to that which is familiar and to an exciting new beginning.’

When St Paul’s opened in 1999 Maureen chaired the school’s establishment board. ‘I worked alongside a team of committed people, many of whom still have a close connection with the school. As the school opened I began my teacher training after a career in the banking industry. It’s been exciting to be a more recent trainee under New Zealand’s current curriculum, which challenges schools to develop.

‘To be returning as principal to the school that has remained dear to my heart, fills me with joy and enthusiasm. I greatly look forward to working with the school community to prepare our young citizens to take their place in the world and seeking to play their part in shaping a socially just community and wider world. And to bringing students an understanding of faith and hope for their future as part of our faith heritage that they see as essential in their world.’ 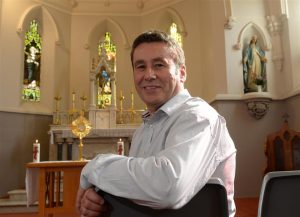 Garin College welcomed its new principal, John Maguire, at a pōwhiri in the college grounds, on the morning of 8 June. John’s family travelled with representatives from Kavanagh College – where he was the school’s head of technology and dean – to be with him.

John brings a wealth of expertise in teaching practice, focusing on curriculum development, leadership and implementation from his years at Kavanagh College, a co-educational Catholic College in Dunedin, renowned for academic, cultural and sporting achievement, pastoral care and developing student spiritually through Catholic principles.

John says he looks forward to bringing these values and new skills to Garin College to raise achievement and engagement for all students, and to promote a safe student-centred learning environment.

Pastoral care is at the core of John’s leadership and practice and his vision is ‘to grow a strong learning community where students encounter Jesus, have a love of learning and a true sense of belonging to a Catholic faith community’.

John and his wife Lou have been welcomed into the Garin community and the Nelson parish. They have four adult children now enjoying careers of their own.