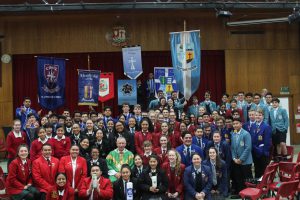 Vinnies from Catholic Colleges in Wellington, Hutt Valley, Masterton and Kapi-Mana, DRSs, teachers and deputy principals, gathered with SVdP members and representatives from the District Councils.

Cardinal John Dew celebrated Mass. He gave an inspirational homily encouraging and thanking the Vinnies for their outreach activities. On Facebook he said, ‘Each college gave a report about what they had done during the year which was impressive, but what was inspiring was how they spoke about what they had learned. These young people are really living their faith in very practical ways.’