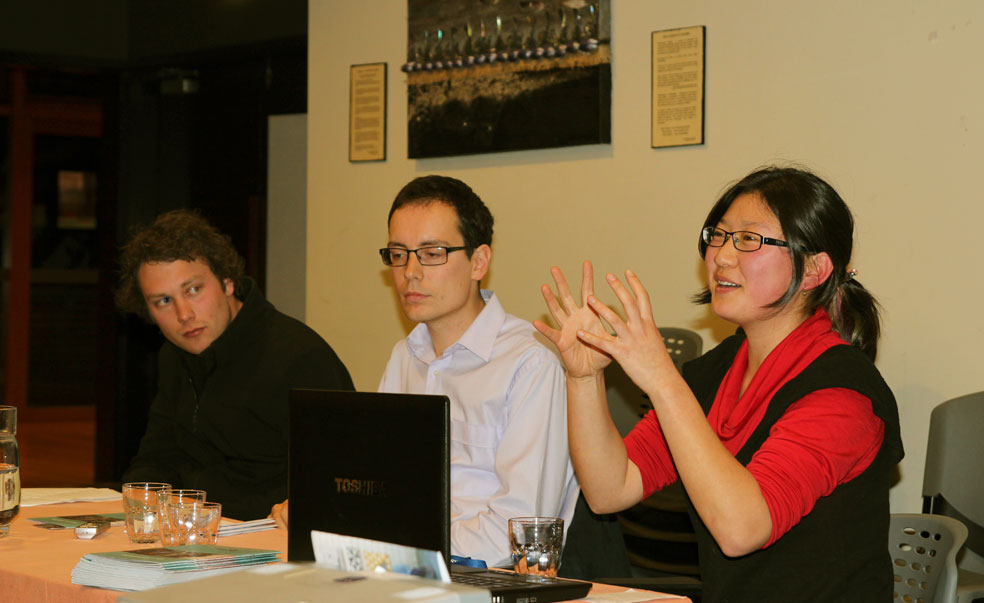 Young people entering the workforce are at risk of being seen as ‘disposable’ in a disposable society, Caritas Social Justice Week Coordinator Cathy Bi told a Wellington seminar looking at young people and work last month.

‘Young people as much as anyone else need meaningful work that pays a decent wage and offers security,’ she said, but policies such as the youth ‘Starting out wage’ and 90-day probationary period for work were threatening this. Instead, young people were in danger of being seen as just another source of cheap labour.

Cathy and youth worker Heath Hutton from Challenge 2000 addressed the group of about 40 people at a Winter Dialogue session hosted by Mt Victoria parish. It was the second in a series of four focusing on ‘Meaningful work for the young worker’, the theme for this year’s Social Justice Week on 8-14 September.

Cathy reflected on her own experience of looking for work for six months after graduation, in a tight job market, where one in six jobseekers aged 15-24 can’t find a job.

It was a hard time, and didn’t match the story she’d been sold throughout her school life that ‘if you just work hard in your studies, you will find a great job at the end.’ But it gave her a chance to think about what is meaningful work.

She describes meaningful work as ‘work that enhances human dignity. It gives people enough to live on and offers security by leading to life-long employment.’

Unfortunately, many young people don’t have that, as casualisation of the workforce is ‘fast becoming the norm’. For some it offers flexibility, but for others it makes it difficult to make ends meet.

‘The responsibility of responding and supporting young workers facing insecure work sits with everyone in the community,’ she said.
She used, as an example, Otorohanga, where ‘biker turned mayor’ Dale Williams has led the central North Island town to set up an institute to provide youth with training geared to the needs of local employers. Mentoring and leadership development also play a huge role. This has been part of the reason why Otorohanga has had single figure unemployment for under 25-year-olds since 2006.

Mentoring and appropriate training also helps at-risk youth, said Heath Hutton, from his experience with the Challenge 2000 social agency.
He deals with a wide range of youth, who may face barriers to work such as lack of qualifications, lack of family role models, health issues, transport, difficulties with CVs and interviews, as well as self-doubt.

But one of the biggest barriers is the attitude of employers and it requires employers who are generous or socially justice minded enough to take a risk to give such youth a chance.

Challenge 2000 acts as a bridge between youth and employment. They provide training, assist with literacy, numeracy and basic computer skills, as well as help young people build self-esteem and confidence. He said, ‘It’s a journey, it’s not just a six-month course or programme.’
During general discussion, with so many workers unsure of their rights, it was felt that schools – Catholic schools in particular – had a role in educating young people about the dignity of work and workers’ rights.

Concerns were also expressed about the current work environment, with low or unequal pay rates in many areas of work, and basic rights – such as the right to a tea break or half-hour break after working five-and-a-half hours – under threat.

Cathy Bi asked those present to remember the significant people who helped them when they started out in work, then asked, ‘How can you be that significant person to the young people around you? What are the gaps you see that are missing and what are you doing about it?’

The winter dialogue series continues on Thursday 12 September with Charles Mōrunga of Ngā Kanohi Marae o Wairarapa speaking on developing skills for rangatahi; then on Thursday 17 October, politicians have their say about young people and work with representatives from National, Labour and Green parties. Both events start at 7.30pm in Mt Victoria parish.