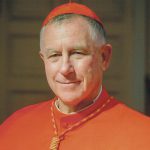 Last year on 20 August Pope Francis wrote a letter to The People of God. Not everyone has read that letter, let alone sat down and talked about it. Those who have talked about it are grateful, and are saying that at last the whole topic of abuse is being addressed and spoken about openly.

None of us want to think any of this is our fault; we could easily think it all happened before our time; we could even just dismiss it as someone else’s problem. But if we did that, sexual abuse would never be faced as it must be faced. The recent meeting in Rome was a wake-up call for me, as it was for many others. One of the people who asked a question after one of the papers was presented said at the end of her question; ‘We didn’t cause this, so why do we have to face it? Pope Francis didn’t cause it either, but he has had the courage to face it head on.’ I took from her words that we all need the same courage if we really want to stop this plague of abuse and cover-ups. We need to talk about it openly and have the courage to say how we feel about it all, how hurt we are, how confused and angry we might be. We also need to help one another to remember that we are members of the Body of Christ, and just as Jesus himself was wounded and crucified and so, we as members of His Body, are also wounded and crucified.

One of the events of the days in Rome was a Penitential Celebration held in the Sala Regia, The Hall of Kings. It seemed incongruous to me to gather in this magnificent hall, a palatial gathering space where we were to reflect on sexual abuse and ask for forgiveness. It seemed even more incongruous that I was to read the ‘Confession of Faith’ in front of the Pope, dozens of cardinals and bishops, priests and religious.

Just before I prayed those prayers on behalf of all present there was a very poignant moment. A victim of abuse (from Latin America) offered his testimony, then he played a Bach piece for violin. It was a haunting piece of music, and suddenly this was no longer just a bunch of clerics gathered to pray, this was about this young man and all those others he represented. Going forward to read those prayers became one of the most powerful things I have ever done. They were simple prayers, but they said so much.

When the Penitential Rite concluded most people left in stunned silence. I continued that silence myself and didn’t even go looking for a Roman restaurant for dinner. I walked the streets pondering and reflecting, wondering how we can halt the damage that has been and is being done. One of the things I do know is that we must continue to see ourselves as the Church, the Body of Christ; remembering that Jesus Himself suffered and died on a cross – we cannot think that as His Body we do not have to suffer too. I also know we are people of Hope, and as I said in one of my recent fortnightly newsletters ‘There is never a time for hope to die’. (See p1.)

We are people who pray. Maybe when we cannot find the words to address all that has been going on, we pray. As always when we pray, for something which is big, or for something very small in our lives, we simply remember all Jesus asks us to do when we pray is to trust in His goodness.

Below are the prayers I was privileged to pray on behalf of all gathered in the Sala Regia that Saturday evening in Rome. They are simple and powerful. Perhaps we can all pray these prayers often.

Lord Jesus Christ, we confess that we are sinful human beings.

We confess that bishops, priest, deacons and religious in the Church have done violence to children and youth, and that we have failed to protect those who most needed our care.

We confess that we have shielded the guilty and have silenced those who have been harmed.

We confess that we have not acknowledged the suffering of many victims nor have we offered help when it was needed.

We confess that often we bishops did not live up to our responsibilities.

We confess that we have sinned in thought, word and deed, in what we have done and failed to do.

Lord Jesus Christ, as ask for your mercy on us sinners.

We ask forgiveness for our sins

We ask for the grace to overcome injustice and to practice justice for the people entrusted to our care.