The archdiocese is well represented in leadership changes at the recent national conference of the Catholic Women’s League.

Anne Joyce of Karori is the new national president, with Diane Glynan and Anne Lumb also of Karori as the new secretary and treasurer and Karori’s Ethne Wyndham-Smith is the League’s new National Social Concerns Officer (NSCO) moving from holding the position for the archdiocese. Ethne is also involved in the National Council of Women and has a strong concern for social justice.

The national conference was held in July when up to 160 women gathered in Invercargill.
Bishop Barry Jones of Christchurch celebrated the opening Mass on July 14, a fitting start to a superbly organised three days. Retiring president Tui Pascoe and her team organised an exciting and well-run conference − even managing to arrange perfect weather.

Of course, no conference in Invercargill would be complete without a light-hearted and amusing welcome from the mayor, Tim Shadbolt, and a much-enjoyed interlude before the serious business of the conference started.

A highlight was an address from the founding director of the Nathaniel Centre Fr Michael McCabe. This bioethics centre is now included in the list of CWL recurring donations.

The League’s national mission secretary, Susan Lloyd of Upper Hutt, gave an excellent picture of a fact-finding trip visiting remote areas in Fiji. Susan reported most mission communities live a very basic existence. Without the help of NZCWL the position would be far worse. Mission-giving in the past financial year amounted to just over $221,000 New Zealand-wide, including over $8000 donated to last year’s Mission at Home Appeal, Grandparents Raising Grandchildren. 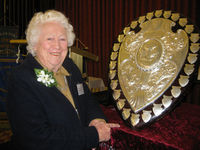 CWL International Officer Kay Blackburn of Waikanae gave an insight into her trip to Jerusalem next month to attend the World Union of Catholic Women’s Organisation centenary assembly (WUCWO) which will celebrate 100 years of service to the church and to the women of the world.

The new national president, Anne Joyce, has held office in branches in four of the six New Zealand dioceses. She is enthusiastic about the challenge ahead – to revitalise the League, to boost membership, particularly among younger women and mothers and to increase the profile of the Catholic Women’s League in parishes.

Above: Cassie Devlin, 93, with the Ranfurly Shield following the sporting panel session at the CWL conference in July.