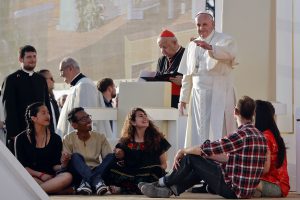 The Vatican’s working document for October’s Synod of Bishops on ‘Young people, the faith and vocational discernment’ has been published.

‘With this, we would like to express, particularly to the church hierarchy, our request for a transparent, welcoming, honest, attractive, communicative, accessible, joyful and interactive community.’

The document is divided into three sections: recognising; interpreting; and choosing with regard to vocation in life.

The first section, recognising, is dedicated to a Church that listens and is open to the realities and challenges young people are faced with today: ‘religious discrimination, racism, job insecurity, poverty, drug addiction, alcoholism, bullying, sexual exploitation, child pornography and corruption, culture of waste and improper use of new digital technologies…’.

The second section, interpreting, focuses on discerning vocations in the light of theological and biblical tradition.

The third section, choosing, indicates the paths of pastoral and missionary conversion. These begin with discernment as a Church that is going out.

The 34,000-word document emphasises the need for catechesis, the practice of charity and for young Catholics not only to have a better understanding of the Church’s social doctrine but also to be active in politics. It further recognises the detrimental effects of an absence of fatherhood, especially in the West, which can affect spiritual paternity.

The document refers to those young people who wish to move away from traditions because they are ‘stuck in the past’ or ‘out of fashion’, but also singles out other young people who ‘seek their identity by taking root in familiar traditions and striving to be faithful to the education they have received’.

The document also includes the views of young Catholics who express disagreement with church teachings, and young gay people. Gender issues are highlighted for attention.

It concludes with a note on holiness saying, ‘youth is a time for holiness’ and holiness should be proposed as a horizon accessible to all young people.

Input into the document came from over 100,000 young respondents to an online questionnaire sent out to national bishops’ conferences around the world last June. Other inputs came from the International Seminar on the Condition of Youth held in Rome in September 2017, and this year’s March pre-synodal meeting. Three-hundred young people attended the pre-synodal meeting, while another 15,000 participated online.