On World Refugee Day, we commemorate the strength, courage and perseverance of millions of refugees. This year, the UN World Refugee Day also marks a key moment for the public to show support for families forced to flee. In Aotearoa New Zealand our Day of Prayer for Refugees and Migrants is Sunday 17 June.

Pope calls for us to welcome migrants and refugees 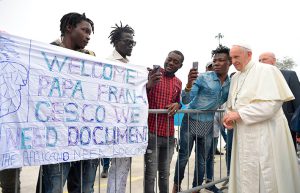 In his message for the 2018 World Day of Peace, celebrated 1 January every year, Pope Francis again called for a more welcoming attitude to the migrants and refugees and denounced ‘the spread of rhetoric decrying the risks posed to national security or the high cost of welcoming new arrivals’ in countries they seek to reach. He said such rhetoric ‘demeans the human dignity due to all as sons and daughters of God.’ In his message, entitled: ‘Migrants and Refugees: men and women in search of peace’, the pope notes there are 250 million migrants in the world today, of whom 22.5 million are refugees, and that ‘all the indicators’ suggest migrations at a global level ‘will continue’ to be an issue in the future. 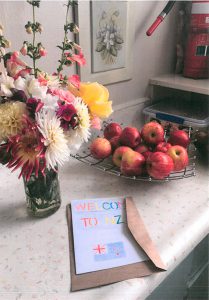 According to the Red Cross Service Centre, Palmerston North settled more than 40 households of approximately 160 former refugees over the last 12 months. They include Burmese Muslim, Rohingya from Myanmar, Palestinians from Syria, Afghan Dari speakers, Karen from Myanmar, South Sudanese and Bhutanese Nepali.

The centre trains over 100 volunteers to work in teams to support the new families for between three to six months. Many volunteers return for second, third and sometimes more placements. Others beaver away in the background doing a variety of tasks.

There are the set-up team of five volunteers who sort the household goods; the St Vincent de Paul Society who have for many years provided food parcels for new families; ‘the Flower Lady’, an elderly volunteer who provides flowers for adults on their arrival; the Toy Sorters who co-ordinate toy boxes for the children.

Based in the city, the Trust covers the Central Districts areas of Hawke’s Bay, Taranaki, Whanganui and Manawatu. To date it has provided financial assistance to bring one family over here, which has been immensely rewarding. The family is now well settled in their new home. The two young men, the sponsor’s cousins, are attending English Teaching College, the parents are enrolled at English Language Partners, the eldest cousin is eager to find work once his English is good enough, the younger cousin has good English and is keen to enrol at UCOL in an IT course.

We have a rental housing shortage in Palmerston North, so there were problems finding accommodation for the family. They now live in a good house in a good location and the sponsor’s uncle is looking forward to Spring to establish a vegetable garden. Another sponsor has approval to bring family members to New Zealand, and preparations are underway.

The Trust has accepted applications from three families waiting to be approved by the New Zealand authorities for admission under the family sponsorship scheme and then the financial assistance committed to them.

While the Trust awaits more donations and funding it is not accepting new applications. The costs of sponsoring family members varies – for example, a family of four with airfares from Afghanistan plus medical fees, can be as much as $12,000. To donate to the Manawatu Reuniting Refugee Families Trust, go online to: givealittle.co.nz/org/manawaturrft

Of all the ways to help a former refugee settle into their new community, enabling them to bring close family members to join them is the best. To find out more about the regulations governing family sponsorship, go to ‘Sponsorship – Refugee Family Support Category’ on the Immigration New Zealand website (immigration.govt.nz).

In March this year , Caritas Aotearoa New Zealand Director, Julianne Hickey went to Rome for the International Catholic Migration Commission (ICMC) on behalf of the New Zealand Bishops. The ICMC meeting discussed the role of the Church and its agencies in addressing migrant and refugee issues.

In his welcoming address, Pope Francis stated: ‘Today as in the past, liberating the poor, the oppressed and the persecuted is an integral part of the mission entrusted by God to the Church.’

On the final day of the meeting, at a private audience with Pope Francis, Mrs Hickey said the Pope listened to the work of many members. ‘He asked us all to take a message to our hearts and our work. He called on us all to welcome, protect, promote and integrate migrants and refugees into our communities. So, what can we all do to welcome, protect, and promote refugees so they can be integrated into our communities and that they too can find a home?’

A call to help with housing for former refugees

For those us working with refugees on a daily basis the housing shortage is causing extreme difficulties and making some refugees feel very unwelcome. There must be landlords out there willing to rent a home to a refugee at a reasonable rent – but how do we find them? This is a heartfelt and desperate plea for landlords to consider renting their properties to a refugee family. If you can help, please contact me on email: acalder@xtra.co.nz or phone (04) 475-7994.