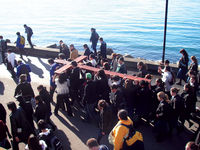 The World Youth Day Cross and Icon spent a joyous week in the two dioceses in June attracting the prayerful and attentive touch of hundreds of people of all ages and cultures.

Pope John Paul II gave the 3.8-metre wooden cross to the young people of the world in 1983 after it had stood near the main altar of St Peter’s Basilica during Holy Week as a symbol of the Catholic faith.

Today it is carried throughout the world as a symbol of hope and of Christ’s love for humanity.

In 2003 the pope added a new symbol, the Icon of Our Lady, Salus Populi Romani, to accompany the cross. This is a copy of a venerated icon in Santa Maria Maggiore in Rome.

Their arrival in New Zealand signals the buildup to World Youth Day in Sydney, just a year from now—a reminder that thousands of WYD pilgrims will be making their way to Sydney via Days in the Diocese in various parts of Aotearoa New Zealand. 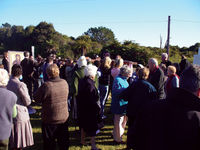 For the Wellington Archdiocese the journey began in Charleston on the West Coast at lunchtime on Sunday 17 June.

In brilliant sunshine what seemed like the entire town turned out to welcome this symbol of Christ-like unity.

Usually a motorist travelling between Greymouth and Westport would barely notice this tiny town with its community hall and statue of Our Lady of the Way. But today it was clear there was an important event in town. In its heyday Charleston was a strong Irish mining town. So it is fitting that the journey of the WYD Cross and Icon started here for the archdiocese, Charleston adding its history to those of thousands of towns throughout Europe initially and then Asia over the past 23 years.

As Youth and Young Adult Ministry adviser, Rebekah Prescott, who travelled with the cross and icon, says on the website, [the cross and icon] ‘remind us that we are part of something so much bigger.’

In Nelson on Sunday night, the cross and icon were welcomed at St Mary’s Parish where the church was lit only by candle light. A liturgy focused on the life of Mary and compared her life with that of young women today—pregnant, unmarried, her fiance looking like deserting her. Her Jesus was accused of many things as young people can tend to be today. She lost her child and became a widow. 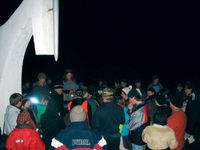 The cross was then walked up the hill to the centre of New Zealand which looks directly over the city of Nelson. On the way up young people led reflections challenging the group to wonder at denying themselves, taking up their daily crosses and following Jesus.

As Garin College student Nina Watts who organised the reflections said, ‘As witnesses we are called not to live two lives, one at Church and around our families and the other at school or work. We must make a stand as we are the only Jesus most people will ever know. What kind of Jesus do people see in you?’

Worship songs rose in the clear, starry night as young people jostled to carry the cross. It came down the hill to a beautiful waiata as it was reunited with the icon—symbols of young merging with their parish families in peace. For more on the Journey of the Cross and Icon throughout the two dioceses www.worldyouthday.org.nz.