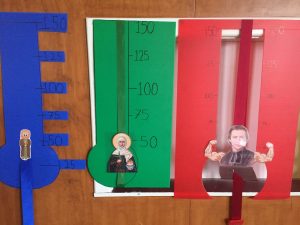 For their term-two project this year, ‘feed the hungry’, the Young Vinnies at Chanel College, Masterton, gathered over 600 non-perishable items to boost the pantries of people in need in the Wairarapa. While every year local foodbanks help thousands of families struggling to make ends meet, the Young Vinnies were especially concerned about families within their community being hungry and going without. So they ran a competition within the school to see which house could first reach a target to collect 500 items. The reward was to be a mufti day.

Pantries at home were raided and items soon began to appear. Some students purchased goods with their own money and one student contributed over 100 items, that he had paid for. As the number of items grew the momentum began picked up. The ‘Saint’ markers on the barometers representing each house measured higher and higher each day as the Vinnies moved closer to the target. The set target was met but items kept coming. Items soon numbered over 600 and everyone enjoyed having a mufti day to celebrate reaching and surpassing the target.

Kevin Conroy and Lyn Tankersly from Carterton Foodbank came to talk to the school about the good work the foodbank does for the community. They provide many food parcels each day made up of nutritious items to feed a family for 24 hours. Kevin and Lyn were able to take all the items collected back to the foodbank for distribution.

The Young Vinnies were extremely happy with their venture’s success and how the school responded to the challenge.

Susie Walker was the lead teacher for the project.